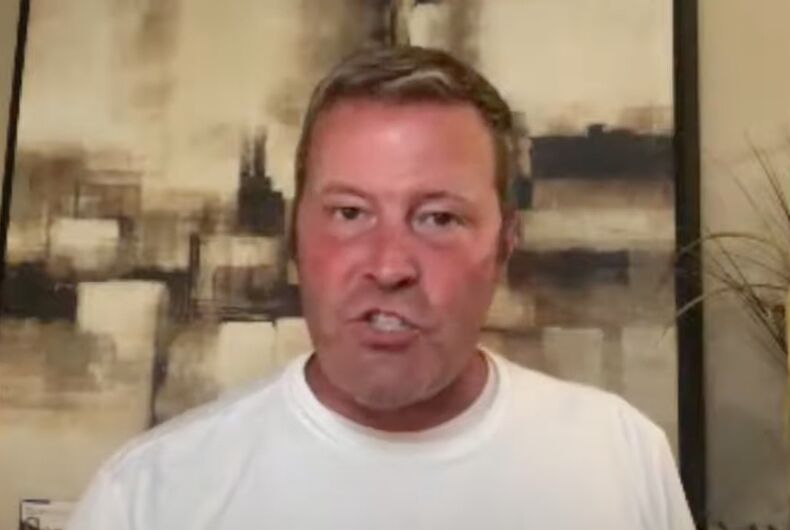 Robert Regan, a Republican candidate for the Michigan House of Representatives, lost an election he was heavily favored to win last night to Democrat Carol Glanville. Regan became infamous during the election for publicly joking about telling his daughters to “lie back and enjoy” being raped.

In March, Regan shocked voters when he made his rape comment during a livestream video event sponsored by the conservative Michigan Rescue Coalition. The coalition supports former President Donald Trump’s baseless claim that the 2020 election was “stolen” by an unprecedented nationwide conspiracy of voter fraud that was not proven after multiple investigations.

During the event, Regan was asked whether he thought Republicans should continue efforts to overturn the 2020 presidential election. In response, he compared accepting the election’s results to laying back and accepting a rape.

“Having three daughters, I tell my daughters, well, ‘If rape is inevitable, you should just lie back and enjoy it.’” Regan said. “That’s not how we roll. That’s not how I won this election. We go right at it.”

Regan then said that, if elected, he’d continue supporting efforts to decertify the election and “give it back to [Trump], the rightful owner.” Trump’s election fraud claims have been repeatedly debunked by numerous audits, court rulings, investigations and even his own secretary of state and top election cybersecurity official.

Though various state Republican officials denounced Regan’s remarks (without ever specifically referencing them), the state party never asked him to withdraw his candidacy.

Last night, Regan lost 52 to 40 percent in his race against Glanville. It was a race he was initially expected to win as the Republican candidate won the seat by 63 percent in 2020.

Regan’s candidacy was also hindered by anti-Semitic messages he had posted on social media. In a May 2021 post, he wrote, “Feminism is only applied against white men, because it has absolutely nothing to do with protecting women as a sex or defending the feelings of individual women. It is a Jewish program to degrade and subjugate white men.”

After defeating Regan, Glanville said, “I am so grateful to the voters in the 74th district who showed up tonight to stand up to hate and keep it out of the State House. My opponent’s extreme, violent, and antisemitic views have no place in state government, and tonight the people of the 74th District made clear that they won’t stand for extremism.”

In 2020, Regan’s own daughter, Stephanie Regan, told people not to vote for her dad. She tweeted, “If you’re in Michigan and 18+ pls for the love of god do not vote for my dad for state rep. Tell everyone.”