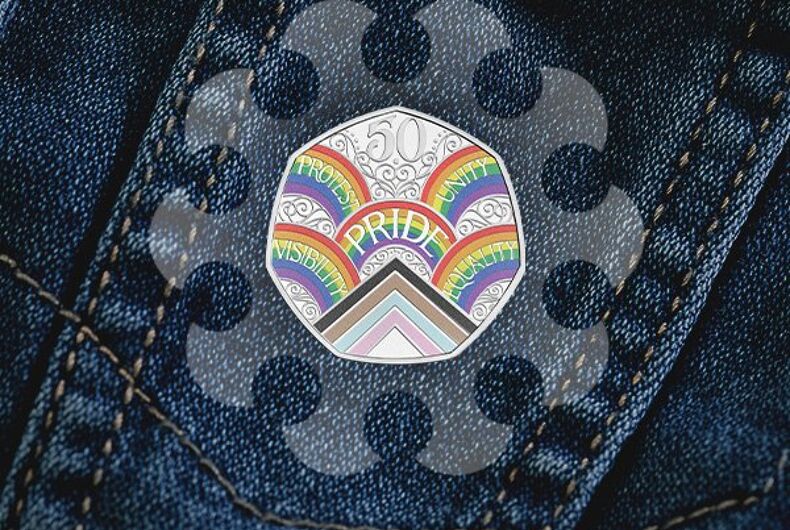 The U.K. Royal Mint has announced that it will issue a special 50 pence coin to honor Pride month and the organization Pride UK.

The group is celebrating its 50th anniversary this year.

“For 50 years, Pride UK has been uniting LGBTQ+ communities nationwide in a colorful celebration of positivity, solidarity and inclusivity,” the Mint said in a release announcing the special rainbow-festooned coin.

“Now in honor of this milestone anniversary, we celebrate the incredible legacy of Pride UK with a new commemorative UK 50p coin dedicated to the indomitable spirit of the United Kingdom’s LGBTQ+ population.”

The coin was designed by artist, writer and LGBTQ+ activist Dominique Holmes.

“Featuring Dominique’s evocative artwork, the coin encompasses the very essence of Pride’s history in the UK and marks the first time we have celebrated the UK’s LGBTQ+ community on a UK coin,” the Mint continued. “Made with support from Pride in London, this release is not only a celebration of Pride UK but also a numismatic tribute to the indomitable spirit of the UK’s LGBTQ+ community.”

The coin will be available this summer. Anyone interested in owning one has to register online.

While this coin won’t be in widespread circulation, the UK issued a £50 note bearing the likeness of famed computer pioneer and WWII hero Alan Turing.

Turing was officially pardoned by Queen Elizabeth II under the little-known Royal Prerogative of Mercy in 2013.