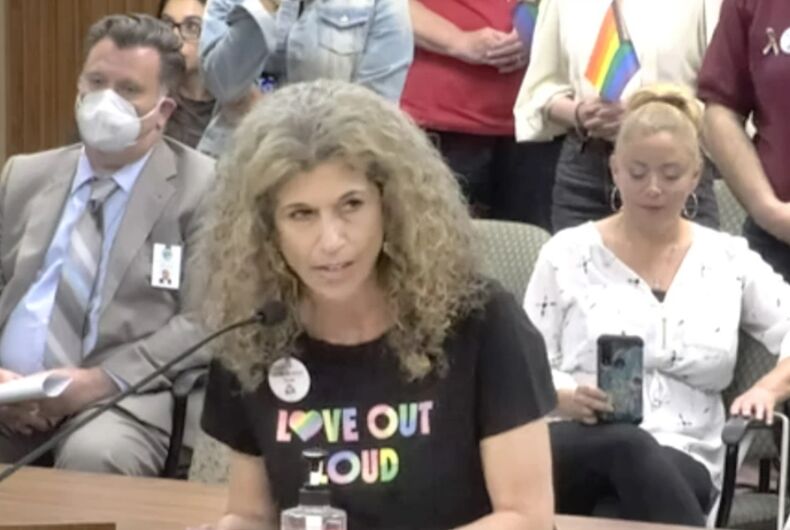 The videos included a retelling of the 1969 Stonewall Riots, a song about same-sex families and Pride parades called “Love is Love”, a video about Pride parades and a video entitled “Talking to Kids about Pride Month”.

It’s unclear which videos Tiber might have shown students in her distance learning classroom when she conducted the lesson near the end of the 2021 school year. While no parents complained about her lesson at the time, some parents and community members have since learned about the lesson thanks to a right-wing activist. Some parents and others spoke against the videos in recent board meetings of the Glendale Unified School District. The district is a suburban Los Angeles school system with about 25,000 students.

The “Talking to Kids about Pride Month” in particular generated comments. In it, straight Canadian TV personality Jessi Cruickshank tells a group of four children that she questioned her own sexuality when she was young after seeing actress Jodi Foster naked in a film.

After a right-wing activist posted Tiber’s correspondence about the videos with a district curriculum advisor onto social media, a blowback against the teacher began.

Some parents and community members at a recent school board meeting accused Tiber of holding a “sexual orientation class” and using classroom time to promote “political and social agendas.” Others said that parents should’ve been notified about Tiber’s lesson plans so they could opt out, stating that issues of gender identity and sexual orientation should only be discussed in the home. However, California has no laws requiring parents to be notified of such content, The Los Angeles Times reported.

Tiber recently received death threats on her family’s answering machine. One woman left a profanity-laced message, stating, “You guys are like the devil. You’re going to get what’s coming to you. … Somebody will be outside your house, I’m sure, a mob.” The caller could face legal charges.

Tiber told district officials that she felt unsafe. The district offered her a voluntary leave of absence, but she declined because she said it “felt like a punishment.” Afterward, the district relocated her to a different school, noting that it was for her safety and not for disciplinary reasons.

Speaking at a recent board meeting, Tiber defended her actions. She said all four videos were approved by a district curriculum advisor. Correspondence between her and the advisor backed up her claim, the Times noted.

“I had hoped to make my classroom a safe space, and that I could teach my students to love and accept others no matter their differences, even if some of them had been taught to disapprove or hate others who are different from them,” she said. “[Instead,] my life has turned upside down … in [a] witch hunt against me.”

Tiber has 34 years of teaching experience and was working at Jefferson Elementary until her transfer. Tiber was one of 21 district teachers taking part in a “Learning for Justice” program that aims to dismantle white supremacy and advance “the human rights of all people.”

“My current third-graders and parents were left in the dark,” Tiber added at the school board meeting. “When I was suddenly ousted from my classroom, they were robbed of their teacher for the last 33 days of school. One message I received from a student said, ‘Mrs. Tiber, where are you? Nothing is working. Please come back. Everyone misses you.’”