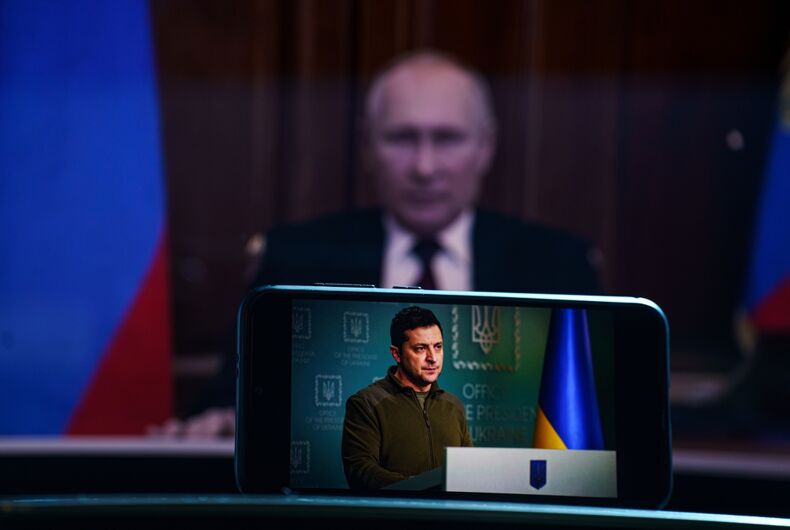 “If you tell a lie big enough and keep repeating it, people will eventually come to believe it. The lie can be maintained only for such time as the State can shield the people from the political, economic and/or military consequences of the lie. It thus becomes vitally important for the State to use all of its powers to repress dissent, for the truth is the mortal enemy of the lie, and thus by extension, the truth is the greatest enemy of the State.”

Though there is no evidence to link this quote to Nazi propaganda chief Joseph Goebbels, even though it is often attributed to him, it does, nonetheless, outline the Nazi party’s ruling strategy built on deception and repression of all opposing voices.

Related: The director of Kyiv Pride on saving LGBTQ lives during the war in Ukraine

I have learned many lessons in my studies of genocides perpetrated throughout the ages. Strong leaders whip up sentiments by employing dehumanizing terminology and images by stereotyping and scapegoating entire groups, while other citizens or entire nations look on, often refusing to intervene.

Everyone, not only the direct perpetrators of oppression, plays a vital role in the genocides. On a micro level, this is also apparent, for example, in episodes of schoolyard, community-based, as well as electronic forms of bullying.

As justification for enacting his so-called “special operation” into Ukraine, Russian President Vladimir Putin has argued that Ukraine’s government is “openly neo-Nazi” and “pro-Nazi” and controlled by “little Nazis.”

To further this conspiracy theory, a member of Russia’s Duma (parliament) asserts that the Biden administration is responsible for the “Nazification” of Ukraine and must be tried in court. Another Russian “lawmaker” advocates for the creation of a “modern analogy to the Nuremberg Tribunal” to bring charges against U.S. actions.

“This rhetoric is factually wrong, morally repugnant, and deeply offensive,” scholars of genocide and Nazism from around the world wrote in an open letter after Putin invaded his sovereign neighbor. While most countries, including Ukraine have far-right groups, the letter continued that “none of this justifies the Russian aggression and the gross mischaracterization of Ukraine.”

But as Joseph Goebbels did actually say: “Accuse the other side of that which you are guilty.”

Though Putin employs the designation of “Nazis” to dehumanize the leadership and citizens of Ukraine and rationale for his invasion, in this instance, Putin and his armies are the true Nazis.

The term “Ukraine,” however, has become synonymous with “Nazism” in the minds of many Russian people.

Recently, a young Russian citizen contacted me to “friend” him on Facebook. Before accepting, I read over his Facebook page for an indication of his political perspectives. He was educated in the United States, high school and a degree from Georgetown University, and his signature picture showed Vladimir Putin speaking at what appeared to be a press conference.

I noticed that he and others swallowed the poison bait of Putin’s depiction of Ukrainians as “Nazis.” I include a sample of comments in this vein on his Facebook page:

Ukrainians as Fascists & Russians as Victims

Accounts have surfaced that Russian troops have and are continuing to commit a seemingly unending string of humanitarian atrocities against the Ukrainian people, which go far beyond destruction of homes and infrastructure.

Soldiers have bombed hospitals and buildings known to shelter frightened and often sick and starving civilians. They have restricted the opening of refugee evacuation routes from besieged towns and villages, and have prevented relief agencies from bringing food, water, and needed medical supplies to people in desperate need.

In reclaimed towns once occupied by the Russian military like Bucha, reports and pictures clearly show the brutality on Putin’s venture, including mass civilian executions, rapes, theft of property, and forced migration into Russian “reeducation camps.”

But how can these young soldiers carry out such atrocities against other human beings, and in this case, against other Slavic people like themselves?

I believe the answer to this question centers on the reality that they do not, in fact, perceive Ukrainian people – under Putin’s campaign of misinformation and false justifications – as fully human beings, but rather as subhuman, as subaltern, or as the German Nazis referred to as “Untermensch.”

The German Nazis used similar strategies in its propaganda film Der Ewige Jude (The Eternal Jew), representing Jews as plague-ridden hordes of rats. The Nazis accepted and advanced the “scientific” view that European-heritage Jews, in fact, all Jews of every so-called “race,” constitute a separate and lower “race” as justification for extermination as if we were vermin.

Heinrich Himmler, the chief of the German secret police (Gestapo) who became the primary architect of the Nazi anti-homosexual campaign, argued in 1933 that male homosexuals are “like women” who cannot fight in a German war effort.

By all appearances, the Springs of Life Church patterned its 1990s anti-LGBTQ propaganda film The Gay Agenda along parallel lines.

Former and twice impeached President Donald Trump represented undocumented immigrants from our southern border and the chain of sanctuary cities that protect them as infestations, and in his arsenal of epithets is his term “breeders,” as if these migrants are an invading swarm of killer bees out to kill and devour the rest of us.

Many of the founders of the United States asserted that our glorious land was fated by Providence (Divine destiny) to separate from England, subdue the less-than-human “heathen savages” who preceded us, extend inexorably from “sea to shining sea” and then some, and create the magnificent Constitution devised by our brilliant and essentially flawless “founding fathers.”

As dominant groups stereotype and scapegoat others in dehumanizing terms, these “others” become less-than-human in the minds of those who would oppress them. So Russian soldiers are not really murdering actual human beings. They are irradiating a dangerous plague-inducing infection that imperils the great Russian people.

The Russian military under Vladimir Putin, their brilliant leader and tactician, are now viewed by the vast majority of Russians as the saviors of their illustrious nation in its inevitable climb to Make Russia Great Again.