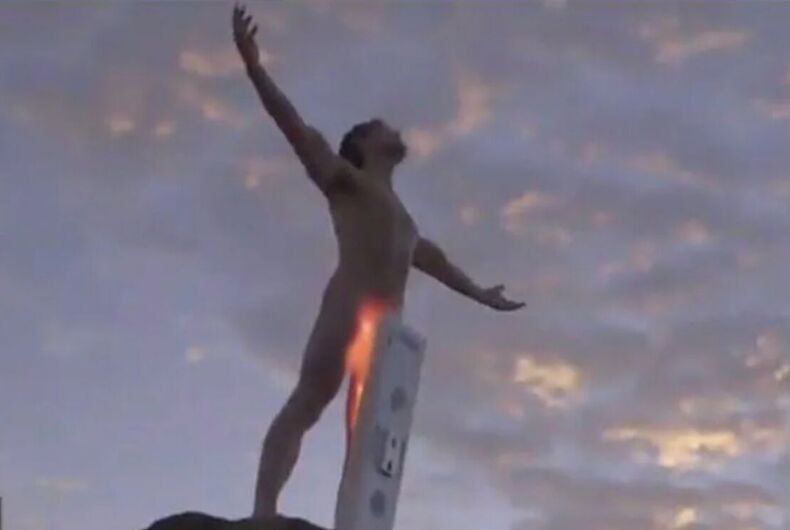 A scene from the trailer for the upcoming Tucker Carlson Originals documentary.Photo: Screenshot

Fox News host Tucker Carlson was mocked over the weekend as a clip about “testicle tanning” was shared online. The clip promoted his upcoming Tucker Carlson Originals documentary, The End of Men.

The film is supposed to be about the decline in testosterone levels in young men over the last two decades, which urologists attribute to a number of factors including increases in average weight, dietary changes, lack of exercise, and possible environmental toxins.

But to listen to Carlson and his guest Andrew McGovern, people aren’t letting their scrotums get enough sunlight.

“If you want to optimize and take it [your testosterone] to another level, expose yourself to red light therapy,” McGovern said, which Carlson called testicle tanning.

“It’s testicle tanning, but it’s also full body red light therapy,” McGovern responded, promoting what is effectively gender-affirming care for cisgender men. But unlike real gender affirming care, there is no science to back testicle tanning as an effective way to increase testosterone levels.

People online had a hard time taking the clip seriously.

The older I get, the more fascinated I become at the nexus of snake oil health gimmicks and racist political hacks.

Exhibit A: testicle tanning for testosterone and Tucker Carlson https://t.co/h5BgpcUAsA

In his new special on how to raise testosterone levels in men, Tucker Carlson’s guest suggests “testicle tanning” using infrared light as a “bromeopathic” therapy. pic.twitter.com/PirerBMRyr

The older I get, the more fascinated I become at the nexus of snake oil health gimmicks and racist political hacks.

Exhibit A: testicle tanning for testosterone and Tucker Carlson https://t.co/h5BgpcUAsA

Testicle tanning is some weak, beta male shit. You gotta go full Alpha and go straight to the source; just put your balls right into the microwave. https://t.co/e7litKmsD0

I didn’t understand how “Woke Disney” was such a threat to someone’s gender identity until Tucker Carlson started advocating “Testicle Tanning” to make you more manly.

Now it all makes perfect sense.

Prior to the interview clip, a trailer for The End of Men was released. It was not taken seriously either.

This is actually real. Evidently he likes men without shirts, which may explain the Putin obsession. https://t.co/tBl2FPq2nT

Whoever wrote their master's thesis on homoeroticism in fascist propaganda, today is your day to shine. https://t.co/BTNpKds6UU

I am sitting here next to my gay husband living my gay life reading a gay novel as research for my new gay book…and yet I am not and will never be as gay as whatever is haunting Tucker Carlson's fantasies. https://t.co/wU05PVIrfG