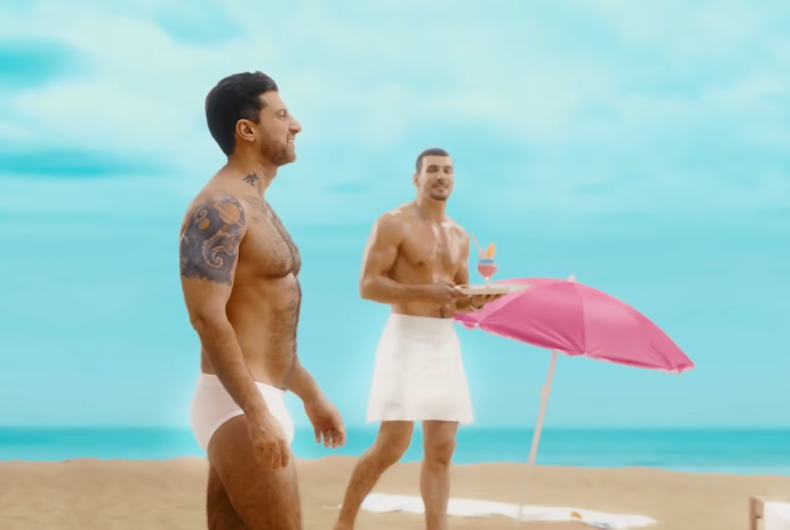 Russian MP Vitaly Milonov is the author of the country’s ban on “gay propaganda” and has been a leading figure in the communist state’s persecution of LGBTQ people.

He’s so worried about impressionable young people being influenced, in fact, that he’s created the homophobic TV show I’m Not Gay. Except it’s accidentally homoerotic and he doesn’t seem to have noticed.

The show rounds up eight men into a house. They have to guess which contestant is gay. They vote out one of the men every week. If they correctly guess the gay man, the men left in the house will share a two million ruble prize. Thanks to Russia’s invasion of Ukraine and the sanctions against the country that have tanked the currency, the prize is currently only worth about $25,000. If the gay man is the last left in the house, he wins the prize.

Calling someone a rooster is an old fashioned anti-gay slur. The show includes a rooster in a cage outside the house and the sound of crowing is used to censor curse words.

But that’s not the only stereotype and insult the show leans into. In the first episode, the men are given lapdances to prove their virility. Some of them get female dancers. Others get men.

Joe.My.God.‘s Joe Jervis has followed Milonov and his anti-gay crusade closely over the years and provides a handy primer on his history.

In 2018, he “forced the closure of an LGBT film festival by falsely claiming there was a ‘hostage crisis’ at the venue. In 2017, he declared that then-German Chancellor Angela Merkel had ‘kissed Satan’ by supporting a vote on legalizing same-sex marriage.”

“Also in 2017, he attempted to ban Disney’s live-action version of Beauty And The Beast as ‘gay propaganda.’ Later that year he vowed to unleash ‘whips and torches’ on a lesbian couple who mocked him by kissing on his flight.”

“In 2016, he appeared here when he vowed to arrest athletes and fans at an LGBT sports festival,” Jervis continued. “In 2015, he proposed a ban on shirtless men and ‘unethical attire’ in public places except for beaches. In 2014, he attempt to ban Eurovision from being shown in Russia due to that year’s win by ‘pervert’ Conchita Wurst.”

“In 2013, he declared that gay men ‘deserve to be punched and kicked’ after a gay man was blinded in a hate crime assault. That came days after he led a police raid on a gay Halloween party.”

As the show begins, Milonov tells the men, “I hope that you will quickly figure out the gay.”

When death seems easy by comparison

The Wachowskis donate sci-fi treasures to help transgender youth. Here’s how you can get some.