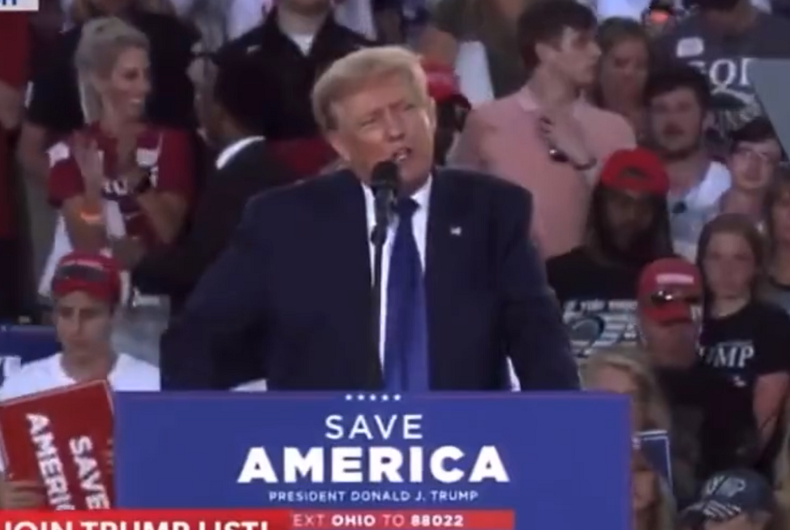 A crowd at an Ohio Trump rally chanted “Save our kids!” as Donald Trump said that kids are learning that transgender people exist in schools.

“No teacher should ever be allowed to teach transgender, traaaansgender… to our children without parental… consent,” Trump said at the Delaware, Ohio rally while people in the crowd held up signs that read “SAVE AMERICA!”

“Isn’t it amazing how that’s become such a big subject?” Trump asked. “And who would even think that that would be a big subject.”

At that moment, the crowd started chanting “Save our kids!”

Crowd chants “save our kids” pic.twitter.com/emPkTNDTzk

Several commentators online noticed the similarity to Anita Bryant’s “Save Our Children” campaign from the 1970’s, one of the first organized anti-LGBTQ movements in the U.S. Bryant claimed that including sexual orientation in anti-discrimination laws – that is, banning discrimination against gay and bisexual people – would result in gay people molesting children in classrooms.

“Some of the stories I could tell you of child recruitment and child abuse by homosexuals would turn your stomach,” Bryant once said.

Trump himself has been accused by multiple people of sexual misconduct against underage girls. One such accuser was Mariah Billado, Miss Vermont Teen USA, who is one of several women who has said that Trump would enter the girls’ dressing room while they were changing.

“I remember putting on my dress really quick, because I was like, ‘Oh my god, there’s a man in here,'” she told Buzzfeed News, adding that Trump said something like, “Don’t worry, ladies, I’ve seen it all before.”

Trump admitted to going backstage at pageants during a 2005 interview with Howard Stern: “Everyone’s getting dressed, and everything else, and you know, no men are anywhere, and I’m allowed to go in because I’m the owner of the pageant and therefore I’m inspecting it.”

“You know, the dresses. Is everything OK? You know, they’re standing there with no clothes. Is everybody OK? and you see these incredible looking women, and so, I sort of get away with things like that,” he said.

Another woman accused Trump of raping her as a 13-year-old aspiring model. She filed a federal lawsuit in 2016 but later dropped it. She refused to do a press conference about it because she had been receiving threats and was too afraid to show up.

At least 25 women have accused Trump of sexual assault and harassment, and Trump admitted to sexually assaulting women during a 2005 interview with Billy Bush.