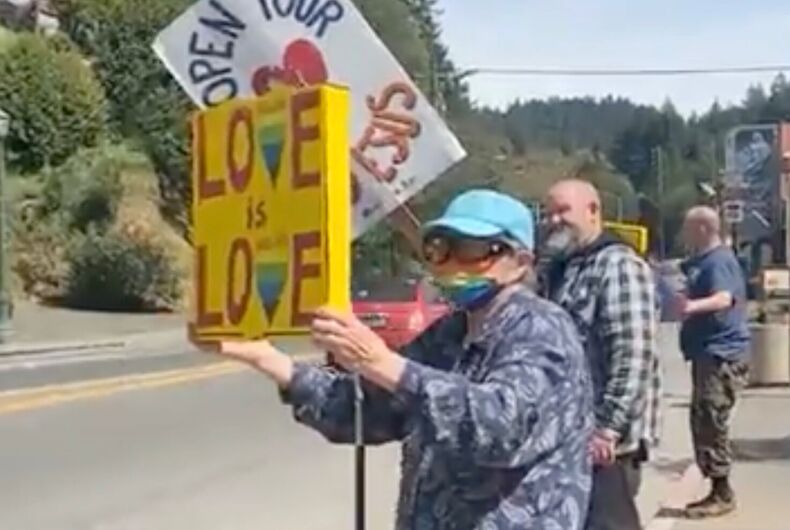 After anti-LGBTQ protestors continued to demonstrate in a plaza in Guerneville, California, a group of counter-protestors calling themselves “The Pizza Box Brigade” showed up to spread messages of love.

The anti-LGBTQ protestors had been yelling at people to avoid Suzy Kuhr’s pizza restaurant, called Smart Pizza, because it flew a rainbow flag, though Kuhr said it has only given her more business in the end.

But sick of the yelling and antics, business owners in the area decided to prepare should the group ever return. They painted messages of love and acceptance on pizza boxes and named themselves the “Pizza Box Brigade.” And when the group did come back, they were ready.

At least a dozen people showed up to counterprotest the six anti-LGBTQ demonstrators.

Kuhr’s sign said, “Jesus loves me and my girlfriend.”

It all started with one of Kuhr’s employees, Louis Britton. Three weeks before the official counterprotest, Britton wrote “Fuck these people” on a pizza box and stood beside the anti-LGBTQ protestors.

County Supervisor Lynda Hopkins posted a photograph of his act on Facebook and wrote that Britton was among those who “give me hope for humanity.”

“Thank you, Pizza Box Guy,” Hopkins wrote. “If they come back tomorrow and you need reinforcements, count me in. As a reminder: these people are not what God’s love looks like. They’re what straight hate looks like, and there’s no room for that in West County.”