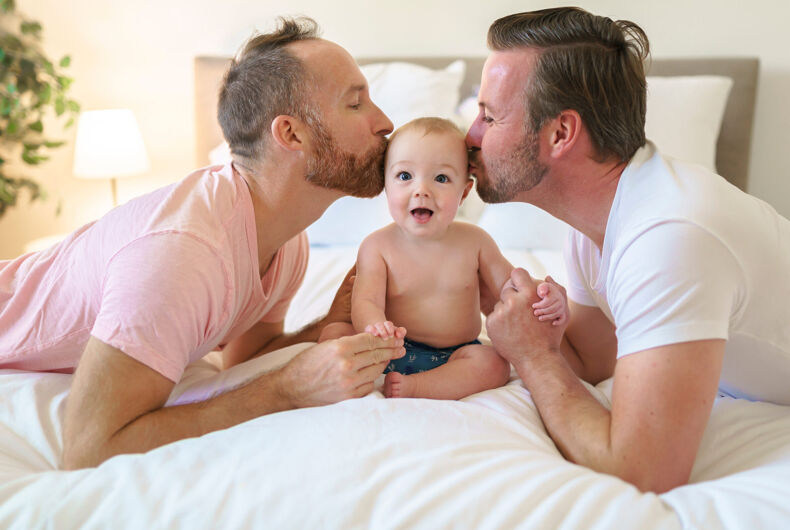 Corey Briskin, 33, and Nicholas Maggipinto, 36, were married in 2016. They want to have a child using IVF and a surrogate. However, they can’t afford to do so without their health insurance covering a portion of the costs.

Related: Want to know how to raise thriving kids? Follow the stories of these amazing LGBTQ parents

IVF procedures can run tens of thousands of dollars, and the surrogate’s time and labor (which isn’t typically covered by health insurance) can cost $100,000 or more. Additionally, Maggipinto has a six-figure student loan debt.

So the couple tried to use Briskin’s health insurance, a benefit he earns as an employee of the city of New York. However, the couple were told they were ineligible for coverage.

The city’s insurance limits IVF coverage to employees or spouses who are “infertile,” that is, unable to get pregnant through heterosexual intercourse or intrauterine insemination. This policy covers women, heterosexual couples and lesbian couples, but not gay male couples.

As such, the city’s policy discriminates on the basis of sex and sexual orientation, violating the state’s anti-discrimination law and Title VII of the federal Civil Rights Act of 1964, the couple argued in its complaint to the Equal Employment Opportunity Commission (EEOC).

New York state law specifically directs insurance providers that cover more than 100 workers to cover at least three cycles of IVF for all insured people, regardless of their gender identity or sexual orientation, the couples’ EEOC filing notes.

“I think what we have here is an old paradigm of what families should look like,” Maggipinto said. “You have policymakers who think a family consists of a man and a woman and two and a half children…. But that’s not what my family will look like.”

The couple now wants the policy changed so that they and other male couples can afford to have children. They also hope the complaint could help encourage insurance providers to cover IVF for male couples across the nation.

A city spokesperson said it would review the couple’s complaint once it was received.

The NFL should withdraw the Super Bowl LVII from Arizona. Here’s why.