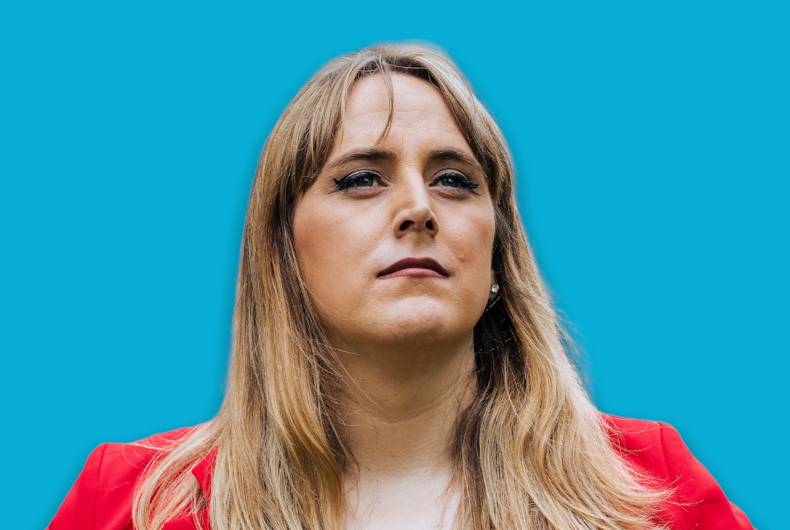 This year, the Republican majority in the Arizona state legislature passed two bills, S.B. 1138 and S.B. 1165, which target trans children. The day before the 2022 Trans Day of Visibility, Gov. Doug Ducey (R) signed them into law, claiming they were about “fairness.”

In reality, S.B. 1138 and S.B. 1165 willfully restrict the opportunities and medical care available to trans children, with no regard to their quality of life or peace of mind.

The passage of these laws will humiliate and harm trans youth in Arizona, and increase the risk of bullying and social ostracization. And when we know that over 52% – over half – of all trans and non-binary minors seriously consider suicide, laws that target and restrict their lives further could quite literally be a death sentence.

94% of LGBTQ youth surveyed by the Trevor Project in 2021 reported that current politics negatively affect their mental health, but Republicans continue with their cruel agenda nonetheless.

S.B. 1165 bans trans girls from playing on girls’ sports teams because “there are inherent biological distinctions that merit separate categories” for players.

In other words, trans girls are not real girls.

Schools will be forced to prove that girls weren’t assigned male at birth by performing invasive bodily searches of their genitals. The same Republicans who insist that LGBTQ education in schools is sexualizing children would force girls to undergo these searches.

Arizona Republicans pretend that this anti-trans sports law is about fairness. Gov. Ducey cites the need to protect cisgender girls from trans girls who would seek to “unfairly” steal their “titles, standing, and scholarships.”

At the core of this law is the belief that trans girls are not real girls – they are boys masquerading as girls, trying to cheat. This is a gross interpretation of a positive trend – that transgender athletes are finally starting to experience the freedom to compete on the teams of their real gender.

Having access to spaces, like sports teams, where their gender identity is embraced dramatically reduces the likelihood that trans youth will attempt suicide.

S.B. 1138 prohibits trans minors from accessing gender reassignment surgery, which is both affirming and often lifesaving for trans youth experiencing gender dysphoria. There is a reason why every major medical association supports gender-affirming healthcare.

Gov. Ducey and other members of the Arizona GOP claim that they are acting in the best interest of trans youth. But for trans children, who bear disproportionately high rates of mental illness, this is the very care that will transform their lives for the better.

It is undeniably wrong for politicians to have more say over a trans child’s body than themselves and their family members. And anti-trans sports bills are just another way of invalidating transgender people and seeking to cast us to the sidelines once more.

But we will not be silenced. Fighting against atrocities like these bills is about saving lives – the lives of children.

Republican leaders in Arizona, and across the country, are obsessed with trans children, and LGBTQ youth more broadly. In 2022, Arizona led the nation with the most anti-LGBTQ bills introduced in its state legislature. These laws are not about fairness or respect, as Ducey says. They are a sinister step toward controlling and coercing trans youth. They are absolutely reprehensible, and everyone in Arizona, and across the nation, should be raising their voices in outrage.

In 2023, the Super Bowl LVII is scheduled to take place in Arizona, outside of my hometown Phoenix, the same city where I am running as a candidate for the state legislature. Phoenix has one of the highest populations of LGBTQ residents of any city in the United States, and my district in particular, Legislative District 5, has a high concentration of LGBTQ constituents.

That’s why I’m calling on the NFL to withdraw the Super Bowl LVII from Arizona in protest of the passage of S.B. 1138 and S.B. 1165 and in solidarity with the Arizona LGBTQ community. The NFL must follow through on what they said during Pride Month of 2021 when they promised they “stand with LGBTQ people this month and year long with a commitment to our players, our fans, and our staff to live proudly and authentically.”

And we’re not alone. Religious leaders and voting rights activists all over the country have already called for the Super Bowl to be relocated over the countless heinous restrictive voting and election laws passed by the Republicans in Arizona this year.

If the NFL truly stands with us, they know what to do. They talk the talk; now it’s time to walk the walk.

Brianna Westbrook, a transgender working-class parent who grew up in poverty, is running for State Representative for District 5. For nearly a decade, she has worked tirelessly with local and national progressive organizations and organizers to meet the community’s needs.

New York City insurance bans gay couples from having kids, so a gay couple is fighting back