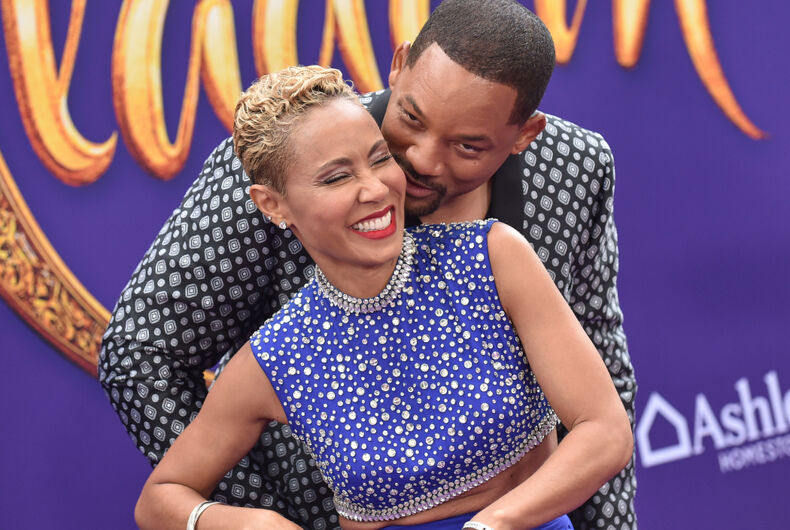 Will and Jada Pinkett SmithPhoto: Shutterstock

By now, everyone has seen or heard about Will Smith slapping Chris Rock at the Oscars for making a tasteless and misogynist joke about his wife’s short hair resembling Demi Moore’s buzzcut in the 1997 movie GI Jane. Jada Pinkett Smith suffers from alopecia, an autoimmune disease that leads to involuntary hair loss.

As shocking as Smith’s slap was, so too are the mixed reactions to the assault within the Black female community, who either praised or condemned his violence.

“When I saw a Black man stand up for his wife. That meant so much to me,” Haddish told the Los Angeles Times. “And maybe the world might not like how it went down, but for me, it was the most beautiful thing I ever seen.”

Even our Rep. Ayanna Pressley (D-MA), who also has alopecia, tweeted a knee-jerk response initially supporting Smith’s assault on Rock that was later deleted, condemning the violence.

“#Alopecia nation stand up! Thank you #WillSmith,” tweeted Pressley. “Shout out to all the husbands who defend their wives living with alopecia in the face of daily ignorance & insults.”

Historical antecedents like 250 years of slavery, 90 years of Jim Crow followed by 60 years of “separate but equal” rule of law to even the present day have never afforded Black men the opportunity to protect and defend the honor of Black women from the brutal hands of white men.

However, romanticizing Smith’s violence as an act of chivalry masks its toxic masculinity.

Later that evening, Smith won the Oscar for best actor for his role in the biopic King Richard, in which he portrayed tennis phenoms Venus’s and Serena’s dad. In his acceptance speech, Smith said, “Richard Williams was a fierce defender of his family,” to justify his actions. However, the following day Richard Williams reacted to Smith’s incident.

“We don’t know all the details of what happened. But we don’t condone anyone hitting anyone else unless it’s in self-defense,” Richard Williams said via his son, Chavoita LeSane, to NBC News.

Moreover, the hubris of Smith to compare his violence that evening on a global stage to Richard Williams’s decade-long struggle raising his talented girls in gang-ridden Compton is appalling. Williams’s physical altercations were with gang members prohibiting him from using the local public tennis courts for his girls’ practice.

During Smith’s acceptance speech was a common phrase too often and eerily espoused by men who batter, beat, and kill their wives and girlfriends: “Love will make you do crazy things.” Just imagine what he’d do if he didn’t love you.

It doesn’t matter if Chris Rock knew or didn’t know about Jada’s alopecia because Black women’s hair is the third rail in the Black community.

The land mine can be detonated even with good intentions, and Chris knows this. In 2009 Chris Rock produced the documentary Good Hair when his daughter asked, “Daddy, how come I don’t have good hair?”

The documentary was intended to destigmatize in an open conversation about Black hair that’s usually kept secret in shame. The discussion included a list of luminaries: Maya Angelou, Raven-Symone, Nia Long, Salt-N-Pepa, Eve, and Reverend Al Sharpton, to name a few, whose insights were, in my opinion, squandered.

That said, it’s clear from Rock’s joke about Jada’s hairstyle that he didn’t learn from his documentary, which felt like a mockumentary. The film was to educate and entertain, but it did neither, and no one was laughing but Rock.

Renowned film critic Robert Ebert reviewed the documentary stating, “Why do I know more about this subject than Chris Rock does?” And he’s white.

And let’s not forget the 2010 Sesame Street controversial song “I Love My Hair,” a remix of “Whip My Hair” sung by Willow Smith, daughter of actors Will and Jada Pinkett Smith. The song was intended to promote self-pride.

However, it received mixed reviews within the African American community, with some critiquing the song as a Black accommodationist version of white girls flinging their tresses.

Will Smith understands the issue. Having a daughter and wife, he knows of the raw, touchy, embarrassing, and humiliating feelings many Black women have about their hair. Smith may have thought he was defending Jada’s honor, but rather, he desecrated his intentions with his violence.

Moreover, to believe Jada could not defend herself is part and parcel of heteropatriarchy. Violence is merely one of its components.