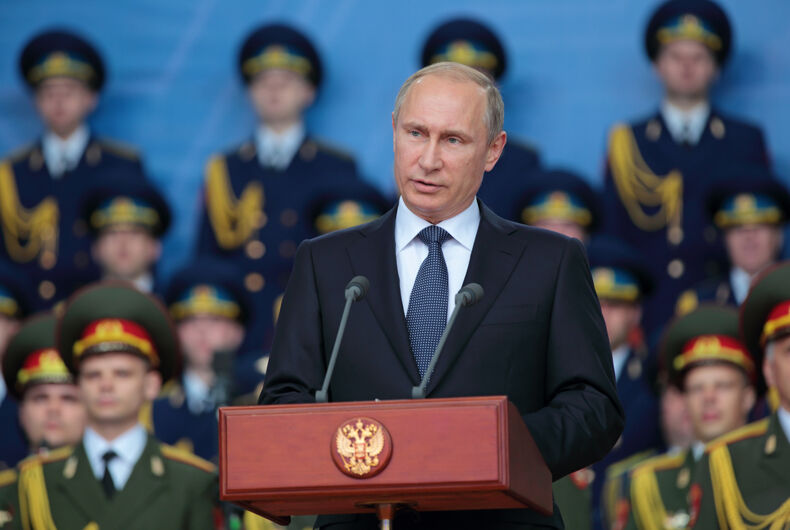 KUBINKA, RUSSIA - JUN 16, 2015: The President of the Russian Federation Vladimir Putin at the opening ceremony of the International military-technical forum ARMY-2015 in military-Patriotic parkPhoto: Shutterstock

It’s Russian President Vladimir Putin, currently the most despised man in the world.

Related: In 1919, the first pro-gay movie was made. A year later, it was banned.

The dictator bemoaned western “cancel culture” during his speech, complaining that Russian contributions to World War II were “canceled” from American textbooks and that the Japanese textbooks don’t give Russia enough credit for being part of the allied powers. Germany had a non-aggression pact with the Soviet Union until Adolf Hitler invaded in 1941, killing millions of Soviet soldiers.

But Putin’s modern-day example of cancel culture doesn’t normally rank with Hitler. While Rowling has destroyed her reputation as the author of a beloved children’s series about tolerance and acceptance, she hasn’t committed genocide.

“They canceled JK Rowling, the children’s author recently,” Putin whined. “Her books are published all over the world. Just because she didn’t satisfy the demands of gender rights.”

“They are now trying to cancel our country. I’m talking about the progressive discrimination of everything to do with Russia.”

Putin returned to the last century to castigate the Nazis for burning books. One of the first targets of the Nazis was Magnus Hirschfeld’s Institute of Sexology. Approximately 20,000 books were burned in the street because they contained homosexuality and other “perversions.”

Russia currently has a ban on “gay propaganda” that prevents the publication of pro-LGBTQ books, articles, and social media posts.

WATCH: Vladimir Putin says the West has "cancelled" JK Rowling and are now "engaging in cancel culture" against Russia.