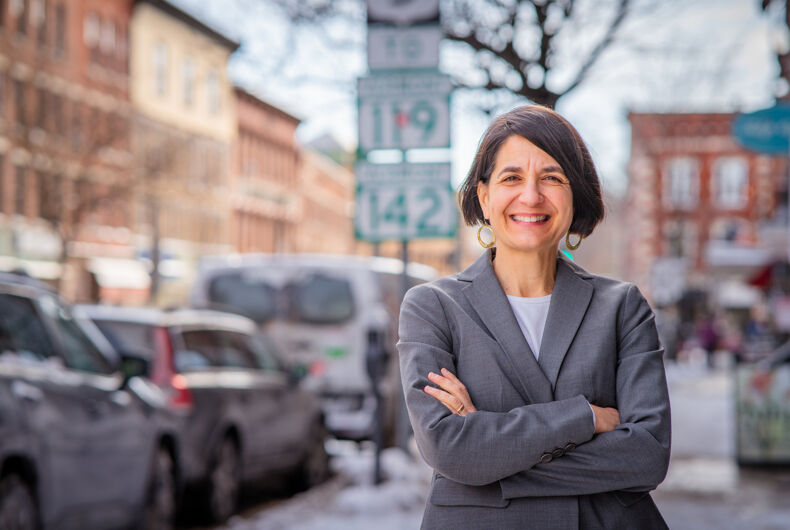 Becca Balint is the first out LGBTQ person elected to Congress from VermontPhoto: Provided by the Becca Balint Campaign

When out Vermont Congressional candidate Becca Balint (D) first moved to the state, someone scratched the word “dyke” into the side her car.

The current President Pro Tempore of the Vermont State Senate has endured ignorance and homophobia throughout her life, but she has always maintained her faith that making connections with people – especially those with whom she doesn’t see eye to eye – can foster real change.

“There is courage that comes when we connect in that way,” she told LGBTQ Nation.

In her Congressional campaign video, she tells the story of moving to Brattleboro, Vermont with her wife and noticing their neighbor’s anti-gay sign on display. Connecting with that neighbor, she said, actually changed their views.

“From a wave to a conversation to a borrowed lawn mower, things changed and the sign came down,” she said.

As such, one of the big messages of Balint’s campaign is that neighbors must stop turning away from each other and start working harder to understand each other.

The message fits with the main reason Balint chose to run for Congress in the first place: to combat the rising threat of authoritarianism in the United States.

“Being in my office when the January 6th insurrection happened, it really hit me quite hard thinking about what we need to do as a nation to get beyond this moment that we’re in,” she said.

To Balint, that means moving her fight to the federal level, where she wants to continue advocating for Vermont families while also fighting to “save the Republic.”

“I want to put all of my energy and heart and spirit into that, really for the rest of my life.”

Balint’s grandfather was killed in the Holocaust, and for her, “issues around authoritarianism and fascism, they’re not abstract.”

If Balint wins her race, she will be the first out LGBTQ person and the first woman elected to Congress from Vermont. She is well-accustomed to blazing trails, having also been the first woman and out gay person to become President Pro Tempore of the state Senate.

Vermont has never sent a woman or openly queer person to Congress.

This #WomensHistoryMonth, we have an opportunity to not only reflect on women’s history – but MAKE women’s history. Don’t you think it’s about time we sent a queer woman to Congress?

Breaking another barrier would be an honor, she said, but more importantly, she said she has always looked at her success as a responsibility to help other marginalized voices access positions of power.

“I make sure I am always mentoring people behind me. that’s something I’ve also taken very seriously in my time in the legislature…I was not from a family in which I ever imagined I could do this. We didn’t come from money. We didn’t have connections.”

In Congress, Balint plans to tackle the workforce and housing shortage crises taking place across many states. She also plans to advocate for “Medicare for All”, as well as greater investments in childcare, paid sick leave, and minimum wage increases.

The US is one of seven nations worldwide without paid family leave.

This #InternationalWomensDay, we must recognize that this falls particularly hard on women, who often act as the primary caregiver for aging parents and children.

Balint has already worked on a number of these issues in the state Senate. As Majority Leader, she said she was proud to be part of passing one of the largest affordable housing investments in state history, as well as what she called “the most ambitious climate legislation” through the Global Warming Solutions Act.

As President Pro Tempore, it has been important to her to act as a leader for all of her colleagues, and not just her own party. She said she spends a lot of time thinking about how best to do that as Republicans across the country become more and more extreme.

“I do think it’s my job not just to prop up democrats and progressives in my party to stand up against that kind of hatred. It’s also important for me to invest in my Republican colleagues who also want a different way and a different path forward. They need to feel like we are not abandoning them entirely because of the rise of Trumpism if they don’t see themselves in line with that.”

Sad and scary. #DontSayGay is a deplorable tactic rooted in homophobia.

I know anyone who has ever felt on “the outside” can understand the feeling of not belonging and feeling vulnerable. You don’t have to be gay to know that we need to stand up for our kids. https://t.co/sTMBrU9vRR

But she emphasized that she isn’t coming to bipartisanship – or even neighborly connections – from a place of naïveté. She knows some people are never going to come around and that not everyone is safe to connect with. But for those that are, she said, it’s crucial to try.

“I want us as a nation to survive, and we need as many allies trying to save the Republic as we can get, and it can’t just fall down along political lines.”

A former public school teacher, Balint wants voters to know that she always brings the stories of her students and their families into her policy work.

Above all else, she added, “I believe in the power of possibility, and I believe that people can be more courageous when they see it modeled.”

These guys offer a wonderful portrait of modern fatherhood. Meet Vernon and Ricardo.