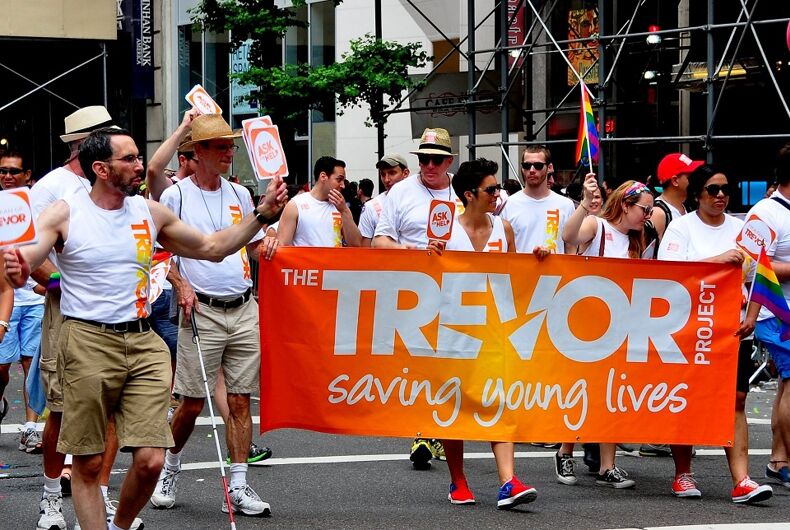 The Trevor Project announced today that it will expand outside the United States for the first time. Already the world’s largest suicide and crisis intervention organization for LGBTQ youth, it will soon offer its 24/7 digital crisis services to struggling youth in Mexico.

“Going international has been part of our 3-year strategic plan, and while there are always improvements to be made, we have a crisis services model that we know works and we feel ready and equipped to take this on,” a spokesperson for the organization told LGBTQ Nation.

They also emphasized the “urgency to reach LGBTQ youth around the world who have little to no access to the types of services we offer.”

“Set against the backdrop of the COVID-19 pandemic, now more than ever mental health concerns for LGBTQ youth continue to rise in all parts of the world, including Mexico.”

In fact, Trevor Project research estimates that globally, over 40 million LGBTQ youth seriously consider suicide each year, and as such Mexico is merely the first place the organization plans to expand.

“This moment marks the beginning of a larger, multi-year plan to offer our crisis services across various global communities.”

Mexico was chosen as the first new country for services after a lengthy research and evaluation process that took several factors into account, including need and the feasibility of operating there.

The team anticipates launching there by the end of the year and expects to reach about 745,000 Mexican youth ages 13-24, though it acknowledges that it is a very rough estimate due to a dire lack of data.

“There is a persistent need for more mental health resources and support for Mexican LGBTQ youth,” Carrazana said in a press release. “We also know that the challenges LGBTQ young people face in Mexico may look different than those that youth face in the U.S. We’re aware that there are many amazing local organizations fighting for the wellbeing of LGBTQ youth in Mexico, and we’re so energized to collaborate with those on the ground and build on the progress they’ve already made.”

The Trevor Project has grown substantially over the past few years, from a team of 60 to almost 350. As such, the team believes it is more than ready to take on this new endeavor.

“Over the past 24 years, we have honed our crisis services approach to serving LGBTQ young people in crisis in the U.S., and we are eager to share the lessons we’ve learned with communities around the world.”

For its Mexico office, The Trevor Project is still seeking an executive director, director of digital crisis services, director of recruitment, director of people operations, and director of growth, among other roles.