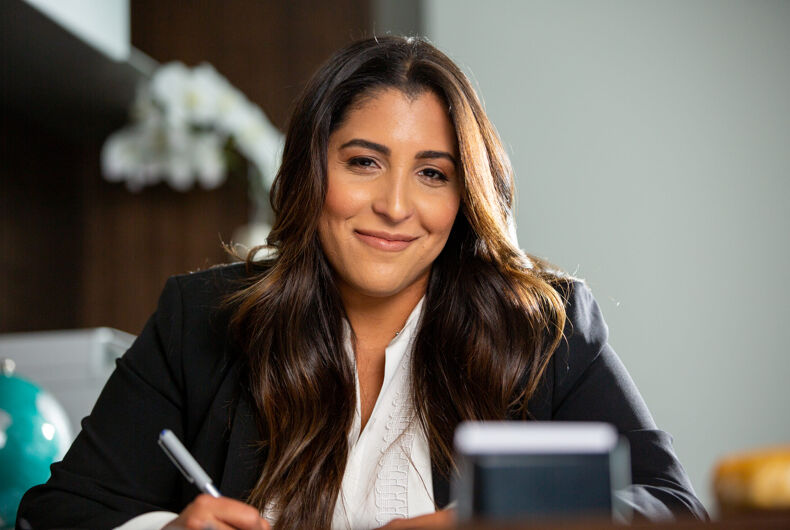 On the same day the Florida legislature passed the “Don’t Say Gay” bill, Janelle Perez and her wife celebrated the birth of their second daughter.

Between “Don’t Say Gay” and restrictive abortion legislation the state recently passed, the out gay candidate for Florida state senate said she is heartbroken that her daughters’ generation will be raised “in a Florida that has less rights than I did growing up.”

Perez isn’t interested in engaging in what she says is a “culture war” Florida Republicans have waged against marginalized communities. Instead, she wants to focus on challenges her constituents are actually experiencing, including housing affordability, gun control, and health care.

Miami-Dade has taken the first step at addressing the rising cost of living in Miami. We are in a workforce housing crisis, #RentIsTooDamnHigh! Help me get to Tallahassee because our state legislature needs to catch up! RT & follow! https://t.co/FDoDDlZKGq

“This legislative session has attacked the LGBTQ community, they’ve attacked Black history. It has been an entire session of culture war. I want people to know that I don’t want to talk about those things…I care about what’s happening to you and I want to find solutions for it and I want you sitting at my table to help me find solutions.”

Both a cancer survivor and one of the owners of a successful local Medicare company, increasing health care access is one of the main reasons Perez is running.

“In the state of Florida, we’ve had 20 years of Republican leadership and we haven’t expanded Medicaid to the levels that it should have been expanded to. There are so many people that are just one healthcare crisis or bill away from bankruptcy, poverty, losing their homes.”

Perez has a high chance of becoming the first out LGBTQ woman in the Florida senate. Currently, she is running unopposed, as her former opponent, state Sen. Ileana Garcia (R), recently filed to run in a different district.

Perez said she thinks Garcia’s move is a “great sign” and that “maybe she’s scared.”

This is what running for office as a mom looks like. #GirlMom x2 💪🏽 pic.twitter.com/92oLPw3ghb

Perez hopes to be part of a Democratic tide that can eventually help flip the Florida legislature. She acknowledged that doing so will be a marathon, not a sprint, but that it’s a cause she’s committed to.

“At the end of the day,” she added, “Florida Republicans, whether they believe it or not, don’t have their own opinion. They have to do whatever the governor and whatever the Republican party of Florida wants them to do.”

Perez wants voters to know that she hears them and understands what they need.

“I want people to feel like they’re part of my family, like they know me. Because I know this community. I have lived in Miami my entire life, and this is a community who deserves someone who understands them.”

I know what it means to fight, and I'm ready to fight for us in Florida's State Senate. I'll work to protect our democracy, expand healthcare, and help our community recover from the pandemic to ensure all Floridians can live the American Dream. pic.twitter.com/4cdYX6rBZ3