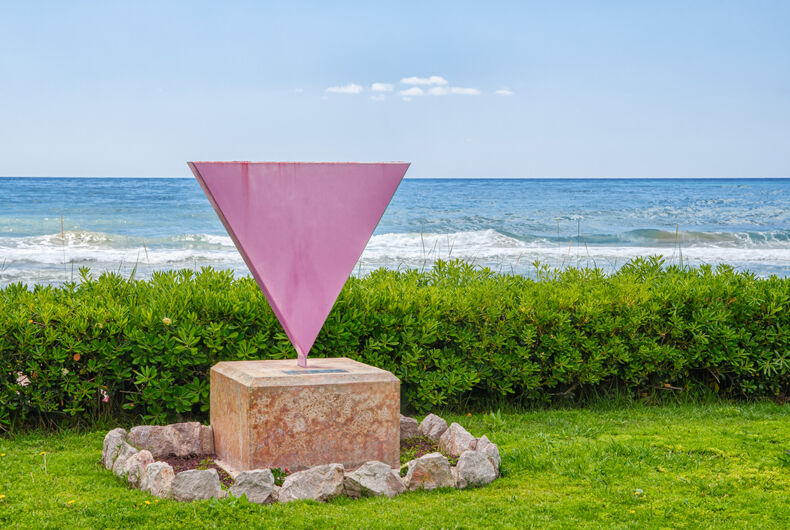 The monument to gay victims of Nazi Germany in Sitges, SpainPhoto: Shutterstock

Six LGBTQ organizations in France are suing a far-right presidential candidate for denying that gay people were targeted by the Nazis during the Holocaust. The lawsuit is the first in France to address Holocaust denial specifically as it relates to LGBTQ people.

According to the organization Holocaust Memorial Day, somewhere between 10,000 and 15,000 men were accused of homosexuality and sent to concentration camps during the Holocaust, and tens of thousands more were arrested and jailed in police prisons. Others were castrated and subjected to “gruesome medical experiments.” Others were killed.

That, though, is a “legend,” according to Eric Zemmour, who is running for president of France. He got national attention with his 2014 book The French Suicide (Le Suicide français), where he said that France has been in decline for decades due to immigration, feminism, and egalitarianism. In that book, he claimed that Vichy France – the authoritarian French regime during World War II that collaborated with the Nazis – actually protected Jews, despite Vichy’s mass arrests of Jewish people in France who were sent to concentration camps.

Last year, Zemmour published a campaign manifesto entitled France Has Not Said Its Final Word (La France n’a pas dit son dernier mot), in which he called it a “legend” that gay people were targeted in France during the Holocaust.

“The deportation of homosexuals from France because of their sexual orientation is a legend,” he wrote. Around 500 men accused of being gay were arrested in France during World War II.

Now, six LGBTQ organizations – Mousse, Stop Homophobie, Inter-LGBT, Adheos, SOS Homophobie, and Quazar – have filed a lawsuit against Zemmour. France, like many other European countries, bans Holocaust denial. These laws have been passed out of fear that denying the Holocaust would be a precursor to it happening again. France’s law was passed in 1990 in order to fight anti-semitism.

The organizations published an op-ed in the French LGBTQ magazine TETU that notes that French authorities themselves did not acknowledge the gay victims of the Holocaust until 1995, refusing to let LGBTQ activists participate in official remembrance ceremonies. And it wasn’t until the 2010s that acknowledging the gay victims was normalized at local ceremonies.

In 2011, Rudolf Brazda – a French man deported to a concentration camp for being gay – was made a knight in the Legion of Honor in recognition of his role as a witness.

“Eric Zemmour’s Holocaust denial is a veiled call to hatred,” the op-ed states. “In denying the crimes committed during the Second World War against gay people, Eric Zemmour minimizes homophobic violence that is still happening today. That is, in in order to understand and fight against homophobia, we have to face up to it, in its historic and everyday reality.”

The French presidential elections will occur on June 12 and the runoff – if no candidate gets over 51% of the vote, no one is expected to – will take place on June 19. Zemmour has generally polled in third or fourth place this past month.