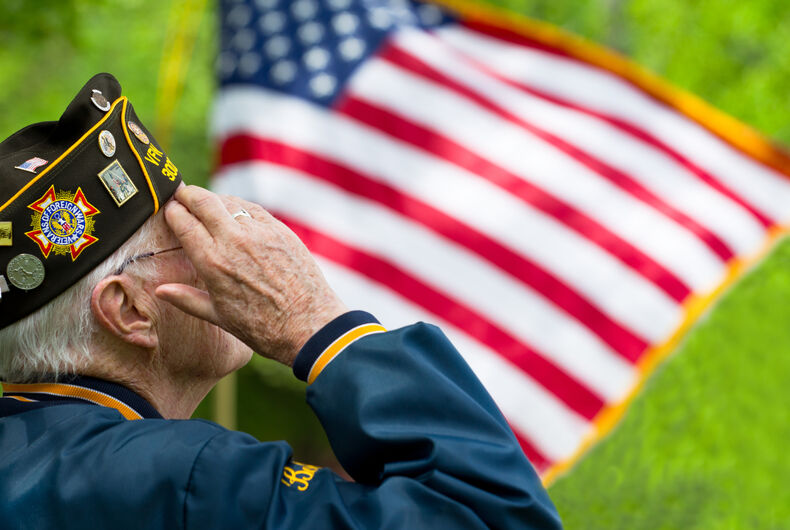 A veteran salutes the flagPhoto: Shutterstock

The Lincoln City Council unanimously approved an updated version of its 2012 “fairness ordinance” that includes protections based on sexual orientation and gender identity. And while LGBTQ community members agree the new language is needed, some are concerned about the backlash.

Following last month’s council decision, opponents mounted a successful signature campaign to put the ordinance on the ballot. The new language includes changes related to veteran status, disability, and race, but opponents are focusing their attacks on the city’s transgender community.

Related link: Conservatives want to disband the Nebraska Board of Education to stop LGBTQ education

The group leading the opposition campaign, the Nebraska Family Alliance, is calling it “a gender identity bathroom ordinance,” which “would allow biological men in women’s showers, locker rooms and restrooms.”

Supporters said they worried that the timing of the ordinance would trigger a ballot initiative at the worst possible time – and that the debate would hone in on transgender people.

“That’s what myself and others have been trying to explain,” community member Natalie Weiss told the Lincoln Journal Star. “It doesn’t matter what else you put in the proposal, once you introduce it, it’s about transgender bathroom access. That’s what the fight will be about.”

That narrow focus was illustrated in a recent robocall, in which former Gov. Kay Orr invited voters to sign the petition to put “Lincoln’s transgender bathroom ordinance” to a vote. Petitioners said they collected more than 18,000 signatures; four times the number required.

“Every person should be treated with dignity and respect,” said Nate Grasz, policy director for the Nebraska Family Alliance told the Washington Times. “The ordinance passed by our city council fails to achieve this and violates the privacy and safety of women and girls.”

While relatively few of the more 330 cities and counties with LGBTQ-inclusive nondiscrimination protections have attempted to repeal them, the tactics of opponents tend to follow a similar pattern. Logan Casey, senior policy researcher and adviser at Movement Advancement Project told the Journal Star that they often include “targeting transgender people in particular and making baseless claims about safety to stoke fear.”

“It is disappointing but not surprising that some are trying to undo these advancements. It is unfortunate a vocal minority of Lincoln residents have chosen to use this victory to spread misinformation about our transgender community,” Out Nebraska said in a statement. “Let us be clear: the use of anti-transgender tropes and creating anti-transgender fear in Lincoln is distressing and frankly harmful. Transgender people are not a debate or a hot-button issue. Trans and non-binary people are your neighbors even if you think you have never met someone who is transgender.”
That rhetoric is taking a toll on Lincoln’s transgender community, who worry that they won’t have enough time to mount a successful campaign in support of the ballot measure. In addition to falling during a midterm election cycle in which turnout tends to be low, the campaign is up against pervasive anti-transgender rhetoric on the state and federal level.

And the harm is already being done. The Lincoln transgender community recently lost one of its most outspoken advocates to suicide. Milo Winslow, the only transgender person to testify in support of the ordinance at city council, died last week.

The day before Winslow died, he announced that he needed to step back from his advocacy work because he didn’t have enough support to deal with the emotional impacts. Friends said that he was discouraged by the number of signatures gathered by opponents.

“Beyond his public fights and battles, what he was advocating for were personal ones, too, that took a toll,” friend Khalisha Casey told the Journal Star. “He has already put up with a lot more than anybody would have to for longer than anyone should have to… It was amazing he was able to continue the fight as long as he did. It was inspirational.”

Have you ever watched a drag queen ski down a mountain? Now you can.

Instagram screenshot notifications: Can people see when you screenshot?