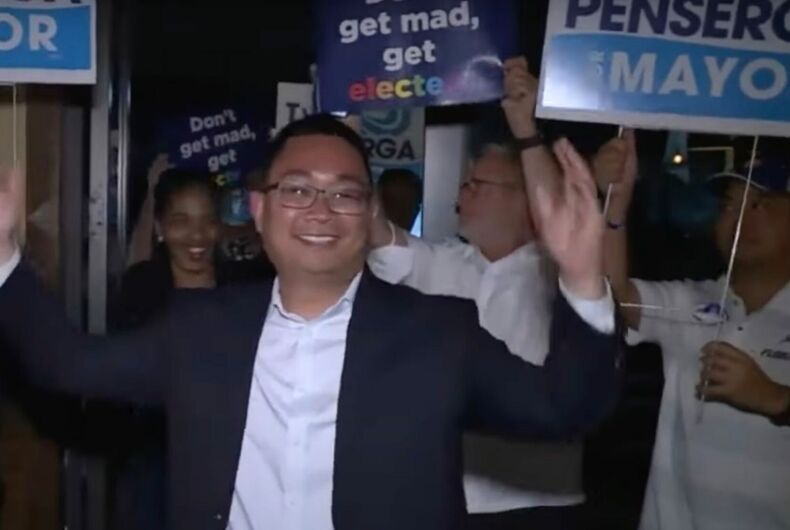 The Florida GOP spent the week passing discriminatory legislation against LGBTQ people and people of color, but one Florida city voted no to it all. The same day the “Don’t Say Gay” bill passed the Senate, Boynton Beach elected its first out LGBTQ mayor, as well as the first Asian-America mayor in Florida history.

Ty Penserga not only won the election, but he beat an outright homophobe who made several anti-LGBTQ comments about him.

During the campaign, candidate Rev. Bernard Wright denigrated Penserga, declaring “I ain’t with the LGBT” and claiming Penserga would turn Boynton Beach into a “gay city.”

He also called Penserga – who immigrated from the Philippines at 6 years old and is now the City Commissioner and a high school science teacher – “just an Asian student…an immigrant…with no life experience.”

Penserga won with 57% of the vote, while Wright came in last place with 6%, South Florida Gay News reported.

“In this room there are people from all parts of the political spectrum, whether you’re a community activist, whether you’re a radio talk show host, whether you are a business person, whether you are a community leader in the LGBTQ community, whatever it is this campaign has brought together so many people and I am so proud of all of you. There is more we have in common than separates us. Most of us are not just one thing, or one category, we cross boundaries. Those are real people with real stories like many of you.”

He also addressed the anti-Asian violence he watching his friends and family endure throughout his life.

“We were afraid and we felt powerless. Nobody was there to fight for us. Where are the protests? Who’s going to City Hall? We didn’t have anyone. That’s where my story began. I realized that not only did I need to build myself up, but I needed to build others up to create a leadership pipeline. We need to build a community of leaders.”

“While legislators in Tallahassee were trying to silence us, voters were making their voices heard at the ballot box. And with resounding enthusiasm, they chose equality. Not only did Ty shatter a lavender ceiling in Boynton Beach tonight, his election is a clear call of hope to LGBTQ people in Florida and across the country who are tirelessly battling legislatures bent on stripping away our basic human rights and freedoms.”

LGBTQ image of the week: trans activist protests violence against women and LGBTQ people in Turkey

The right loves First Amendment rights. But only when it applies to them.