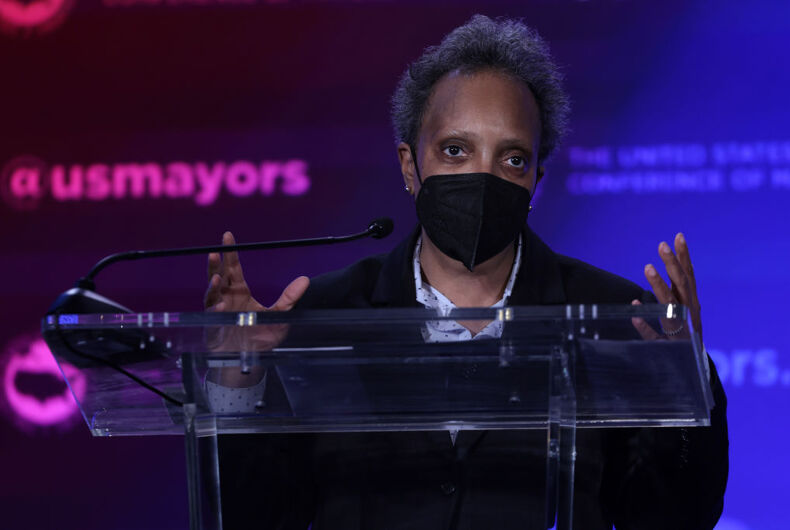 WASHINGTON, DC - JANUARY 20: Chicago Mayor Lori Lightfoot speaks during the 90th Winter Meeting of USCM on January 20, 2022 in Washington, DC. The U.S. Conference of Mayors held its annual winter meeting to hear from Congressional leaders, Biden Administration officials, and other experts to discuss the best ways to achieve the goals of America’s cities in 2022. Photo: Alex Wong/Getty Images

Out Chicago mayor Lori Lightfoot is being sued after she allegedly bragged during a Zoom meeting that she has “the biggest dick in Chicago.”

The brash mayor, unhappy with a proposed settlement by Park District lawyers “proceeded to berate and defame” the team during her profane tirade according to a lawsuit filed by former Chicago Park District deputy general counsel George Smyrniotis.

As part of an ongoing dispute over a statue of Christopher Columbus, Lightfoot ordered the lawyers to settle a lawsuit brought by an Italian American group after she had the statue removed from a local park. But when the team came to an agreement with the group to allow the statue to be displayed as part of a parade, the unhappy mayor reportedly lost her cool – and pulled out her ruler.

“Get that fucking statue back before noon tomorrow or I am going to have you fired,” Lightfoot said, according to the complaint, adding that they were “not to do a fucking thing with that statute without my approval.”

“What the fuck were you thinking?”

“You make some kind of secret agreement with Italians. … You are out there stroking your dicks over the Columbus statue, I am trying to keep Chicago police officers from being shot and you are trying to get them shot,” Lightfoot said, according to the lawsuit. “My dick is bigger than yours and the Italians. I have the biggest dick in Chicago.”

Smyrniotis resigned his position last month; he says the comments caused his coworkers to question his ability to do his job.

The mayor’s office declined to comment, saying it had not seen the complaint.

Here are the countries most unfriendly to LGBTQ travelers