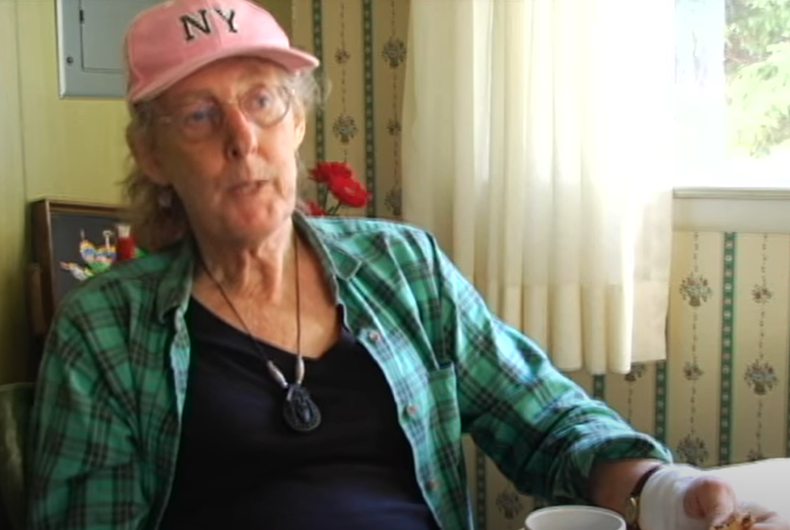 Rusty Mae Moore talks about the Transy House in a documentary for Frameline.Photo: Screenshot

After Moore and her wife Chelsea Goodwin purchased a Brooklyn row house in the early 1990s, they began to take in trans people who had nowhere else to go.

“We very quickly started allowing otherwise homeless trans people to crash with us. We weren’t trying to set up an institution or anything, but Rusty could relate, and so could I, to the old idea of a hippie crash pad that was a safe place you could go,” Goodwin told the New York Times.

“We were taking in trans people that were between housing situations, which, with discrimination and so forth being what they were in those days, was quite often.”

The de facto shelter came to be called “Transy House,” and was inspired by the STAR House run by Street Transvestite Action Revolutionaries founders Marsha P. Johnson and Sylvia Rivera in the 1970s. Rivera was a longtime resident of Transy House, where she served as the unofficial house elder.

“Everybody [at Transy House] calls me Ma – Ma Sylvia. We help everybody that we can and we get involved in everything that we can,” Rivera said in 1999 interview. “We just go all over getting arrested.”

Over the years, communal living started to lead to burnout, and Moore and Goodwin eventually left the row house to retire to upstate New York. But it wasn’t easy to leave Transy House behind.

“You push the nestling out of the nest eventually, because they’ve got to go out and fly,” Moore said in a short documentary released in 2009. “It’s a hard thing to do.”

In a 2005 blog post, Moore offered the following self-description:

I am a 63 year old college professor, parent of three children, grandparent of one grandchild, Presbyterian, Scotch-Irish, Western Pennsylvanian emigrated to Brooklyn, and a vegetarian folksinging bicycling carpenter. My car is a 1987 Jeep Grand Cherokee. I went to West Nottingham Academy, Northwestern University and the Fletcher School of Law and Diplomacy. I speak fluent Portuguese. I subscribe to the Economist. I am a traveler in the Herman Hesse sense of the term. I support the US Bill of Rights and Medical Marijuana. My partner and I often transgress the bi-polar gender construct. I love football, Brazilian and American. I think the foregoing gives ample data points for triangulating the sort of person I am.

In addition to the tangible support of shelter and time engaged in activism, Moore also inspired a sense of pride in being transgender.

“Sometimes you’re generous with material things — and Rusty spent a lot of money taking care of people she didn’t have to take care of,” Mariah Lopez, the executive director of the Strategic Trans Alliance for Radical Reform, told the New York Times. “Rusty made me understand that we have been around for a long time, and she gave me a pride deeper than a fight. A pride in being transgender related to the beauty of being trans.”

Moore was also actively involved with the Metropolitan Gender Network and infused her activism with her career as a business professor, teaching the first Gender Studies course at Hofstra University.

Moore is survived by her wife; her three children Jonica Moore, Amanda (Moore) Rogers, and Colin Zug Moore McGeorge; and her two grandchildren, Caleb and Felix. She is also survived by her “adopted” extended family, including Gina Sommers and Antonia Cambareri.