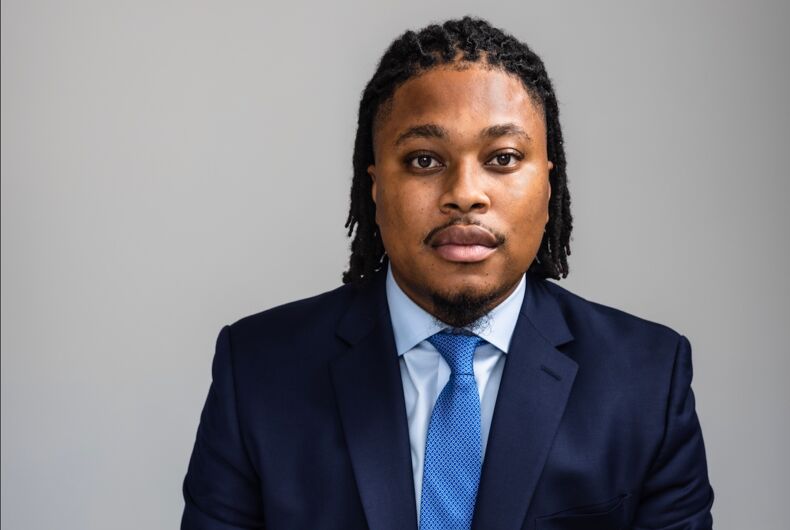 If you ask Pennsylvania Rep. and U.S. Senate candidate Malcolm Kenyatta (D) what he is most proud of in his political career, he will tell you that the moment hasn’t happened yet.

“My big hope will be that there is some kid right now who is watching this campaign who is saying to themselves, ‘You know what, I can do that too,'” Kenyatta told LGBTQ Nation.

Kenyatta could become the first out gay man elected to the U.S. Senate, as well as the first Black senator from Pennsylvania.

“Those distinctions are important,” he said, “but it’s less about it being important to me and it’s more about the ripple effect I hope it creates for people who see themselves and therefore understand that their possibilities are limitless. It is so difficult for kids to be something they can’t see.”

It’s official: I am a Democrat running to be a voice for working families in the US Senate. Help us build this movement from the ground up: https://t.co/S4UAhtPfkU pic.twitter.com/8amZkdaKac

Kenyatta announced his Senate run last February and has long been considered a rising star in the Democratic party.

In a landslide victory in 2018, he became the first LGBTQ person of color to be elected to the Pennsylvania General Assembly at the age of 28.

Chronicled in a short documentary called Going Forward, Kenyatta’s intense passion and commitment to change has captivated many.

At the 2020 Democratic National Convention, he was one of 17 rising star Democrats to deliver the keynote address and one of the first three out LGBTQ people to ever do so.

He decided to run for U.S. Senate because he believes that right now, there is “an assault on the core question of whether or not democracy could work for people.”

Kenyatta thinks it should work for working families and believes in what he calls a “basic bargain” that says everyone should have access to safe and affordable housing, quality healthcare, a safe education, and clean neighborhoods.

And if elected, he has a big agenda.

Among his major priorities as a Senator would be advocating for the passage of the John Lewis Voting Rights Act and the Freedom to Vote Act – both of which have been blocked by Sen. Kyrsten Sinema (D-AZ) and Sen. Joe Manchin’s (D-WV) refusal to support filibuster reform.

“If you don’t have the ability to vote… then you don’t even have the capacity to really participate in a democracy, which is the floor of all of this. So we have to get rid of the filibuster and pass [this legislation].”

Fighting the climate crisis is also key to that “basic bargain” of getting to live in a safe and clean neighborhood, he said.

First they ignore you ✅
Then they laugh at you✅
Then they fight you (in progress 🙃)
Then you win.

Kenyatta also made it clear that he is not willing to entertain the “lies, misinformation, and disinformation,” in which the Republican party has been trafficking.

“We have one party who has decided that the core of what they believe is that the election was stolen, even though that is completely false, and if their person doesn’t win they should change the rules.”

“It’s not just two sides who disagree, there is one side, Republicans, who are actively anti-Democratic… If Republicans want to join us in reality I’m willing to work with them on whatever we can.”

Kenyatta said he “will push back every time there is nonsense being spewed,” but that he also believes in working as hard on the issues the two parties agree on as the ones they disagree on.

“I am willing to work with anybody if they are trying to advance a thoughtful solution to any of those buckets I mentioned around America’s basic bargain. When you grow up in a working poor family the way I did, you don’t give a damn who the solution came from… What people want are solutions to the problems facing them in their lives.”

He added that as a state representative, he introduced one of the bills most dear to his heart, Phillip’s Law, with a Republican. The bill, named for an 11-year-old boy in his district who died by suicide, sought to expand mental healthcare access to students in schools. It did not become law, but Kenyatta hopes to prioritize expanding mental health access for youth as a senator.

I did in fact say this. https://t.co/9dFdK0Fyfe

Kenyatta follows a rich family legacy of standing up for his community. His grandfather, the late Muhammad Kenyatta, was a civil rights activist who he often thinks about in his own fight for justice.

“As has often been said, we are our ancestors’ wildest dreams, and I certainly feel that I am the wildest dream of my grandfather and my ancestors, but what I also think about is the fact that this idea of expanding the basic bargain so it reaches everywhere is sadly not a new pursuit.”

He remembers his grandmother calling him up in 2019 about an issue being debated on the floor of the Pennsylvania House. “She saw it and said, ‘Baby I’m so sorry. I thought we had fixed some of this stuff.'”

“I refuse to have a conversation like that with my grandkids,” Kenyatta declared. “This is our opportunity to get this stuff done… If government doesn’t work for working families, this experiment in democracy is at risk… Every generation has a responsibility to make it work and pull us closer, even if that means kicking and screaming, to what the American promise is for every single one of us.”

Teacher says she got harassed for standing up for LGBTQ kids. Now she’s suing the district.