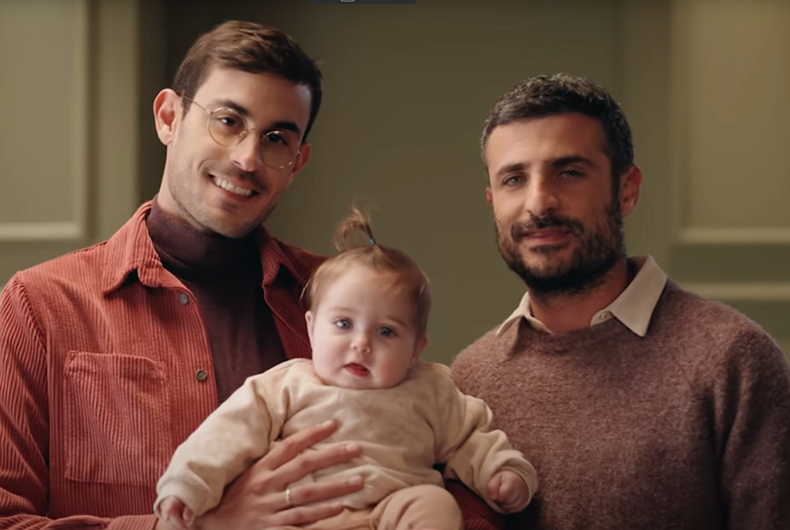 Religious conservatives are calling for a boycott of Doritos because of their new, LGBTQ-inclusive ad.

The ad, which is being aired in Israel, shows families coming together to get their pictures taken. Some of those families are headed by same-sex couples, including two women and their three children and two men and their baby.

“But there are some families that do choose to be families,” the voiceover says as the two women and their children are shown, according to The Times of Israel. “There are families created by the complex reality.”

“There are many families and they are all special and even if it takes courage to dare in all choices, all families deserve to be families,” the voiceover says at the end. The newspaper also notes that one of the couples shown is a mixed secular-religious couple with their children.

Now, many conservative leaders are angry.

“For the sake of the mental and spiritual health of the coming generations, we must boycott Doritos, which is trying to influence the natural family group by advertising its products,” said Jerusalem Deputy Mayor Aryeh King.

Rabbi Baruch Efrati of the West Bank settlement of Efrat called the ad “evil” and said, “It is forbidden to recognize those who live like this as a family.”

The editor of the religious Zionist magazine B’Sheva, Emmanuel Shilo, took a more political route, also advocating a boycott of Doritos for including LGBTQ families in their ad.

“Judaism only recognizes a family with a man and a woman,” Shilo wrote. “I won’t get involved in the life of someone who chooses to live differently, but I won’t give my money to a company that uses it to harm my values, Jewish family values.”

In a statement, a spokesperson for Doritos said that the ad isn’t going to be removed.

“We respect all views, beliefs and the diversity of Israeli society and have no intention to harm any group,” the statement said.

While homosexuality was legalized in Israel in 1988, the country still does not recognize marriage equality.