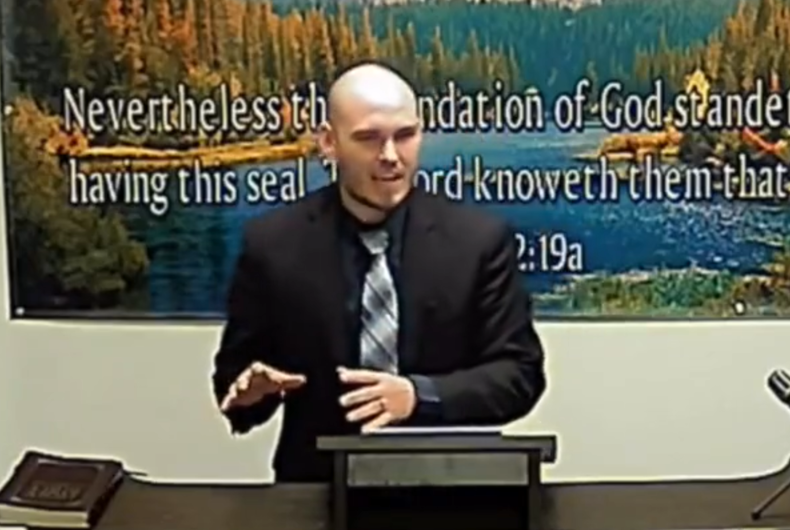 A hateful pastor in Spokane said he hopes that “every single homosexual dies.” And when he got called out for his rhetoric, he stood by it, saying that he really does hope for all gay people to die.

Related: A man who threatened to kill gay people in mass shooting was arrested

“And that’s why they commit suicide, which is great. I hope every single homosexual dies.”

The next week, Kutsar appeared to have seen the clip getting shared on social media and he wanted everyone to know that he stands by his words.

“What’s the over/under on this guy having a secret Grindr account and being busted with a gay sex worker and a bag of drugs soon?” one commenter wrote under the first video, for example.

The Sure Foundation Baptist Church’s website is down but its Facebook page says that its “mission is to reach the greater Spokane area with the Gospel of Jesus Christ through door to door soulwinning. To baptize converts and teach them good doctrine.”

Kutsar’s sermons are posted to the church’s Facebook feed, which also includes videos promising to “expose” the Catholic Church and about “Witchcraft and Satanism In The Music Industry.”

Baptist preacher Danil Kutsar became aware of the vile sermon clip I shared earlier… so he doubled down on his statement calling for the death of gay people.

He also thinks most of you agree with him. https://t.co/zXs5ApxGXm pic.twitter.com/t9qYwms2so