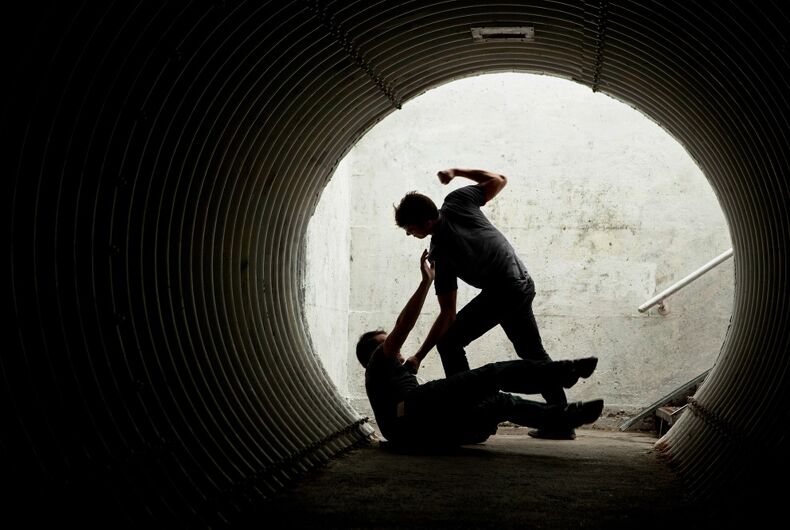 A 28-year-old man is on trial for allegedly beating a 53-year-old homeless man to death “for no other reason than for being gay.”

Timmy Hourihane was a father of one and a trained chef who had worked at a hotel in the U.K. before returning home and finding himself without a place to stay. He was found dead in October 2019 with several missing teeth and brain swelling as a result of trauma to his head and face. A state pathologist testified at the trial that Hourhane had 17 injuries to his face, which were so bad that bones were exposed and broken.

Hourihane was wearing a silver ring with the word “DAD” engraved on it.

Prosecutors in Cork, Ireland, believe that James Brady beat Timmy Hourihane with another man, who can’t be named in the media, according to The Southern Star. All three were living in a tent city for homeless people near Cork.

According to witness Kathleen O’Brien, Brady and the other man were “firing each other up, getting angrier and angrier” when they walked up to Hourihane.

When asked what they were angry about, she said that Brady was saying that Hourihane “flirted with him and tried to drop a hand on him.” The other man and Brady “got into a rage. James Brady hit Timmy and Timmy fell down and then [the other man] went in.”

“I think he hit him in the face with his fist,” she told the court. “Timmy fell over.”

She said that Hourihane appeared surprised and didn’t defend himself at first.

On the ground, Brady kicked open Hourihane’s legs and told the other man to “go on, kick him, he’s only a faggot.” She said that the men stomped on Hourihane’s head and legs, encouraging each other to get more violent against him.

She said that she tried to protect Hourihane’s head from getting kicked, but the men just kicked his legs instead. When she tried to stop them from kicking his legs, they would go and kick his head.

“There was no stopping,” O’Brien told the court. “I screamed and pleaded, everything, for them to stop.”

She said that the men then hit her to get her to go away. She suffered a black eye and bruises.

O’Brien told the court that the only reason Brady and the other man stopped kicking Hourihane is that they had “exhausted themselves.” She said the victim was “beyond recognition.”

She was asked why she told police that night that she knew nothing about the attack, and she said that she was scared that Brady and the other man would come after her, “seeing what they did.”

Brady is facing a murder charge and pled not guilty. His lawyer asked O’Brien if Brady was trying to pull the other man off Hourihane. She said no.

“I can tell you this, with my hand on my heart, on the holy Bible, James Brady and [the other man] killed that man for no other reason than the man was gay.”

Another witness, Martin Harrington, said that he heard “screaming” and went to see what was happening.

“The young lad, called Jamie – James. He’s here,” Harrington testified. He said that he ran off scared after Brady told him to “fuck off and mind your own business.”

“That’s exactly what I done.”

Another witness, Kieran Duggan, said that he saw Hourihane’s body after the beating.

“There was blood all over the ground, his head was in a pool of blood,” he said.

Kieran Stanley and Nicole Srock-Stanley, a married couple, said they pulled over when they saw a fire that they thought was out of control. The fire was, according to prosecutors, Hourihane’s tent which had been set on fire after the beating.

Kieran Stanley said that he heard “gurgling” and then saw Hourihane on the ground.

State pathologist Dr. Margot Bolster said that Hourihane died by drowning in his own blood as his lungs and face bled, with cardiac arrest caused by swelling and a lack of blood making it to the brain.

She testified about the bruising and cuts on his face, how some of his facial bones were exposed due to the lacerations, how the whites of his eyes were red with blood, how his jaw bone was fractured.

Dr. Bolster said that she examined his body at the scene and saw that Hourihane’s tent had been burned down.

The other man is not on trial at the moment. His trial will start at a later date.