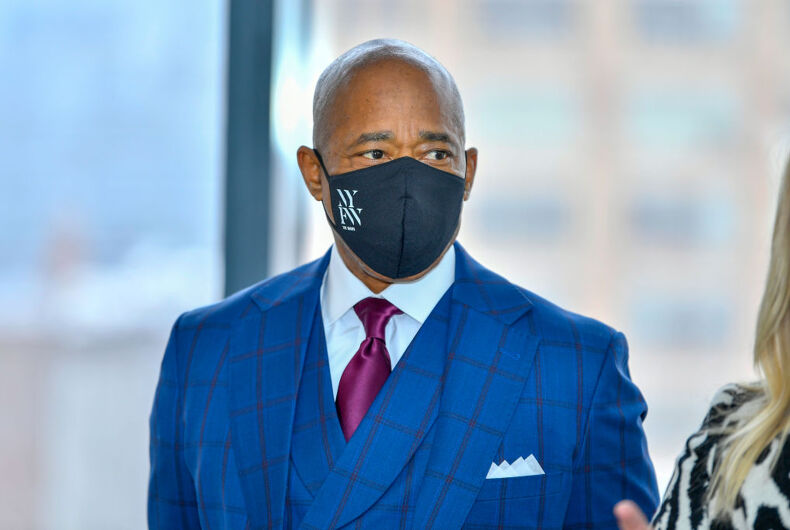 Cabrera, a conservative pastor and Democrat, is being considered for a “faith-based” position in the administration despite vehement objections from the LGBTQ community. Cabrera once expressed support for a Ugandan law that would execute people convicted of being gay.

“The United States of America has put pressure; It has told Uganda, ‘We are not going to fund you anymore unless you allow gay marriage,’ and they have stood in their place. Why? Because the Christians have assumed the place of decision-making for the nation. Abortions are illegal here — things that Christians really stand for. Why? Because the Christians here took the opportunity to take their rightful place,” Cabrera said in a video posted by journalist Andres Duque.

Out state Sen. Brad Hoylman (D) had a confrontation with Adams during a private meeting with lawmakers after the mayor told them he would be moving forward with the appointment.

Previous plans to install Cabrera as the head of the Mayor’s Office of Community Mental Health were scuttled after LGBTQ activists reacted with outrage over the idea of putting a man who supports conversion therapy and thinks homosexuality is a mental illness in charge of mental health care programs for LGBTQ residents.

Holyman adamantly told Adams that Cabrera “is a bigot and has no place in City Hall,” but his objection fell on deaf ears according to the Daily News.

“[Adams] basically responded that, ‘We can agree to disagree,’ and that this is his administration and that he can do what he wants,” the person who was in the room told the outlet.

Adams created the new Office of Faith-Based and Community Partnership to be “a conduit between city government, the faith-based community throughout New York City and nonprofit organization,” his administration says. The mayor is not considered a staunch ally of LGBTQ rights but isn’t an active opponent either.

“It would be disappointing to see him in any role in city government. Our taxpayer dollars shouldn’t go to cover the salary of a bigoted homophobe,” Stonewall Democratic Club of NYC President Rose Christ said.

Activist Allen Roskoff agreed, saying that putting Cabrera in the position is “equally as unacceptable as him running the mental health office.”

An antivaxxer shouted slurs at a teenager outside of school. She’s getting what she deserves.