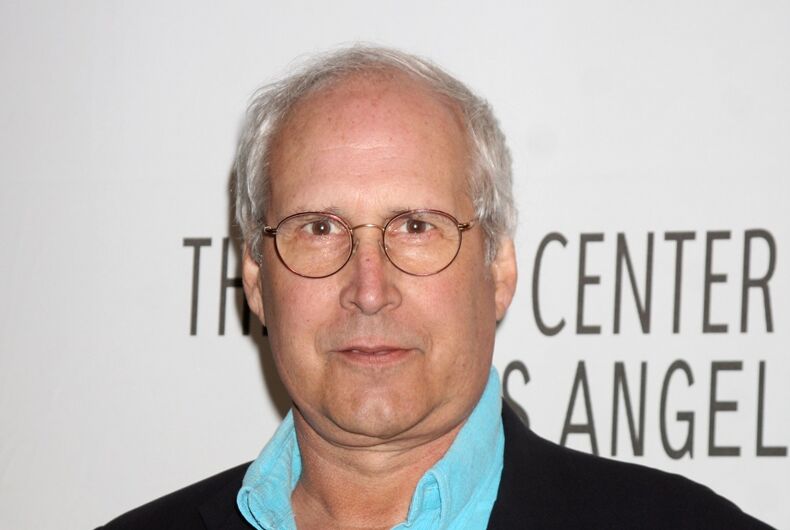 Actor Chevy Chase says he doesn’t “give a crap” that people are calling him out for his alleged racist, sexist, homophobic, and “genuinely bad” workplace behavior. One out gay actor even called Chase a “monster” behind the scenes.

Chase has faced many accusations of bad behavior on various workplaces. For example, Terry Sweeney, the first out gay actor on SNL, said that Chase wanted him to do a sketch where Sweeney would play a character who has AIDS and gets weighed every week on the show. Chase was later forced to apologize for the suggestion.

“So Chevy looks at Terry Sweeney and goes, ‘You’re gay, right?'” actor Jon Lovitz recounted, confirming Sweeney’s story. “Terry goes, ‘Yes, what would you like me to do for you?’ Chevy goes, ‘Well, you can start by licking my balls.'”

Actor Donald Glover, according to LGBTQ Nation‘s sibling site Queerty, also accused Chase of making a racist comment when they worked on the sitcom Community together. He said Chase told him that “people think you’re funnier because you’re Black.”

Even actor Will Farrell has spoken out against Chase, saying in 2020 that Chase made sexist jokes when appearing on SNL.

“I don’t know if he was on something, but he was just kind of going around the room and systematically riffing,” Farrell said at the time. “First it was on the guys, playfully making fun, until, when he got to one of our female writers, he made some reference like, ‘Maybe you can give me a hand job later.’”

“In hindsight, I wish we’d all gotten up and walked out of the room.”