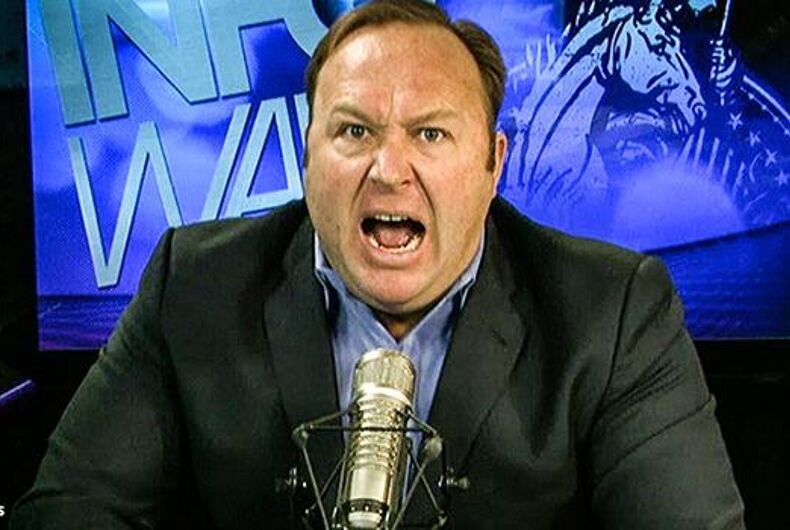 Conspiracy theorist Alex Jones isn’t exactly a source of reliable information, but he’s become a fixture in radical right circles. His wild claims dabble in all the trappings of conspiracy theories, including racist and anti-Semitic stereotypes and disgusting anti-LGBTQ slurs and insinuations.

But Jones may have hit a new level of revolting when he urged Ukrainians to welcome a Russian invasion so that the Jewish philanthropist doesn’t “cut your son’s balls off” and turn them transgender.

Jones spun a wild tale for his listeners that President Joe Biden is plotting to frame Russia to manufacture an excuse for war. Experts worldwide have said the opposite, and the government has specifically warned that the Russian government is waging a propaganda effort that would give them a pretext for invasion.

“So how do they convince the average American that Russia is about to attack?” Jones asked listeners in the middle of his nonsensical assertions. “When the West is pumping the weapons in, the West is starting the fight, the West is running this whole operation, and of course the Ukrainians have some real beefs. I mean this has been going on forever. It’s like your big brother Russia comes in and, you know, beats you up on a routine basis, but it’s not the Huns, and it’s not George Soros that’s going to cut your son’s balls off, OK?”

“So you can have the Russians in there or you can have George Soros literally going after your children. So that’s where we are right now, and here’s the final equation. It’s very simple, if you’re already escalating a war, you’re already in a proxy war that’s going into a quote hybrid war, that’s what it is, that then goes into a full scale regional theater war that’s destined to become a entire continental war and then a world war. That’s how it works.”

“So again, the Russians are in Eastern Ukraine, they’re in a few other areas that they’ve annexed like Crimea and they’re under attack. And the globalists just keep expecting in the offensive they’ve already launched against the Russian-held areas that the Russians are going to strike back and then that’s called the Russian invasion, just like in Georgia in 2008 and that’s just the facts, ladies and gentlemen. That’s the facts.”

“George Soros is there to take scalps, which are all the boys’ testicles and the Russians and some Ukrainians don’t want their sons’ balls literally chopped off.”

Jones has used Soros as a punching bag for years, railing against the wealthy businessman for his involvement in progressive causes and “immoral” investments. Soros has given away over $32 billion to charity, over 60 percent of his fortune.

Jones is worth approximately $6 million, most of it made selling nutritional supplements, end-of-the-world preparation gear, and other shady ventures. He hasn’t made any major charitable donations proportionate to Soros’s, but after being found liable of defaming the parents and child victims of a school shooting, he could owe millions in damages.