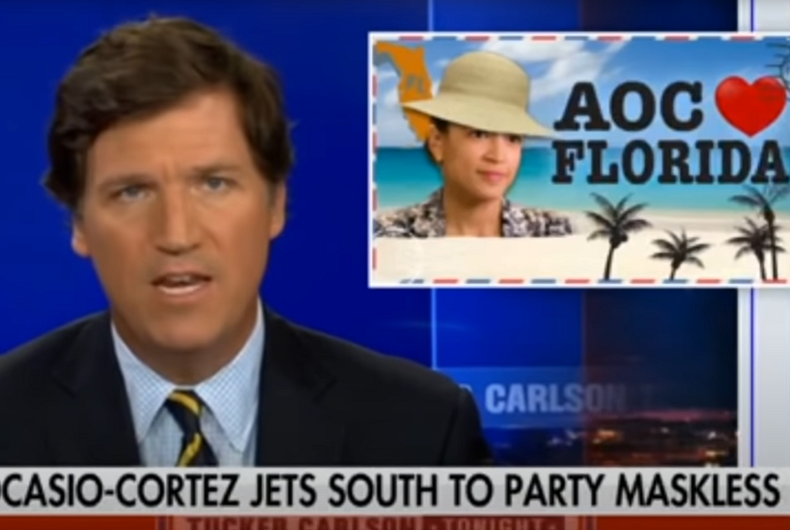 Last night on Tucker Carlson Tonight, Carlson played a clip of President Joe Biden at Rehoboth Beach in Delaware, playing with his dog while wearing a mask.

The Centers for Disease Control and Prevention (CDC) say, “In general, you do not need to wear a mask in outdoor settings.” Carlson was at least generally in agreement with their advice but took it a step further and labeled Biden “completely bonkers” for wearing a mask outdoors.

“He’s outside, it’s a breezy day, there’s no one around but his own triple-vaxxed wife, the woman he claims to share a bed with,” Carlson said. “You’d think Joe Biden would consider this a safe environment.”

“But no!” Carlson continued. “What, you’ve got to ask yourself, does Joe Biden imagine is going to hurt him? And how is the little mask supposed to help? Is he worried about wave-borne viruses? Clouds of pathogens floating over the Atlantic from the Azores? Infected sea gulls?”

“It’s all so completely bonkers.”

Having established that it’s “completely bonkers” to wear a mask outdoors, one would think that Carlson wouldn’t forget that claim so easily. But mere minutes later, he was angry that Rep. Alexandria Ocasio-Cortez (D-NY) wasn’t wearing a mask outdoors.

Footage of Ocasio-Cortez at the drag bar in Miami went viral on rightwing social media this past Sunday, even though the video clip clearly shows that she was very much outdoors.

“Sandy went to Florida on vacation with her boyfriend, and of course she didn’t wear a mask,” Carlson said, using the nickname “Sandy” for Rep. Ocasio-Cortez even though it’s generally not how the Latina Congresswoman prefers to be addressed. “She got caught on video not wearing a mask and got attacked!”

“Within the same 30 minutes, Tucker Carlson has attacked Joe Biden for being photographed outside with a mask, *and* attacked AOC for being photographed outside without a mask,” journalist Aaron Rupar tweeted with screenshots of both parts of the show that had chyron that highlighted Carlson’s adamant opposition to – and support for – wearing masks outdoors.

EXPOSED: AOC is STILL lounging it up in Florida, in large crowds and maskless. This time at a Drag Queen bar in Miami.

Rules for thee but not for me. pic.twitter.com/8l30GFA0GT

Cardi B says that homophobes are “just ugly”