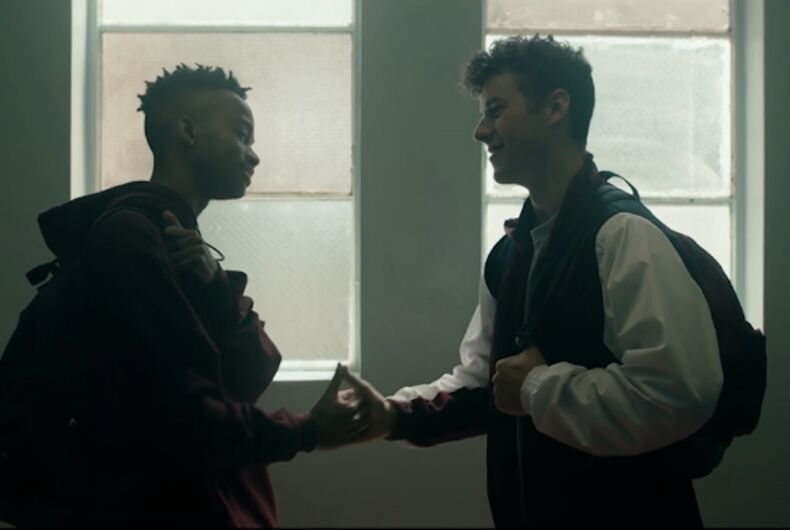 The song’s title is the phone number of the U.S. National Suicide Prevention Lifeline. Its video showed a gay Black teen calling the number after being outed and receiving homophobic abuse by his track-and-field teammates.

Related: Here’s the new number to text for the National Suicide Prevention Lifeline

The video gained attention for its unique story and also the celebrities who appeared in it. It featured Nickelodeon star Coy Stewart as the gay teen, Oscar-nominated actor Don Cheadle as his father, Modern Family’s Nolan Gould as his boyfriend, Emmy-nominated actor Matthew Modine as his boyfriend’s father and the boys’ dads and award-nominated character actor Luis Guzmán as a supportive coach.

The study, published in the December 2021 edition of the British Medical Association peer-reviewed trade journal BMJ, looked at suicide data from the U.S. Centers for Disease Control and Prevention (CDC) and the number of calls into the U.S. National Suicide Prevention Lifeline from the start of January 2010 until the end of December 2018.

It also looked at Twitter posts to determine the amount of attention that Logic’s song received. It found that the song received the strongest amount of public attention right after three events: the video’s initial August 17, 2017 release; the August 27, 2017 MTV Video Music Awards; and the January 28, 2018 Grammy Awards. Logic performed the song at the two latter events.

In the 34-day period following all three events, the Lifeline received 9,915 more calls than it had on average during 34-day periods in the years before. These calls were a 6.9 percent increase over the number of calls usually expected.

Furthermore, in the 34-days after these three events, there were 245 fewer suicides nationwide than usually experienced during the same time-spans in previous years.

The study’s lead researcher — Thomas Niederkrotenthaler, an associate professor at the Suicide Research Unit at the Medical University of Vienna — said his findings support the idea that media messages can have an impact on suicide prevention and crisis management, according to Psych Central.

However, Niederkrotenthaler also concedes that other factors may have contributed to the increase in Lifeline calls and reduction in suicides that his research team observed. But while Logic’s video may have saved lives, research also suggests that media reporting of suicides and suicide myths can increase suicide rates.

Regardless, the study suggests the importance and positive impact of promoting suicide lifelines in popular media. This could especially help LGBTQ individuals, who experience suicidal ideation and attempts more than the general public.

On the youth side, the Trevor Project’s 2021 National Youth Mental Health Survey found that 42 percent of LGBTQ youth seriously considered suicide in the past year, including more than half of trans and non-binary youth.