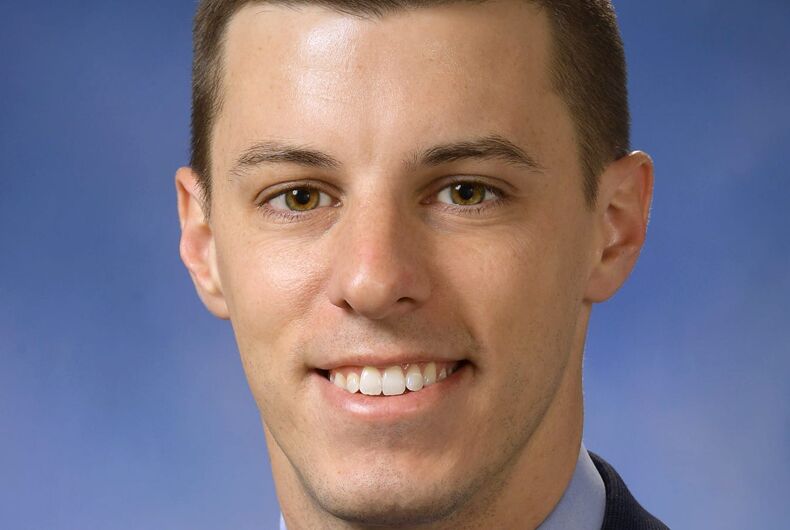 A former lawmaker in Michigan who once compared LGBTQ people to pedophiles was accused last week of molesting a minor. Now he claims that he and the victim had a “years-long adult relationship” and that she is making “false claims” that their relationship started when she was 15-years-old.

Last week, the sister-in-law of former Michigan House Speaker Lee Chatfield (R) came forward with the accusation that he sexually assaulted her for over a decade, starting when she was just 15-years-old.

She told Bridge Michigan that she started going over to her teacher Lee Chatfield’s home at that age because she came from a troubled home. She met Lee Chatfield’s young children and wife, and would often babysit for the family.

That’s when Lee Chatfield allegedly started touching her in the basement to “take advantage of me. So he would manipulate me, he would mess with my emotions.”

Eventually he started sexually assaulting her and continued to do so “more times than I can count,” Rebekah Chatfield said. She said that she stopped resisting at some point.

Chatfield would eventually become the youngest House Speaker in the history of the state and would use his power to stop sexual orientation and gender identity from being added to the state’s civil rights legislation. He even went so far as to compare LGBTQ people to “swingers, adulterers, polygamists, and pedophiles.”

Rebekah Chatfield said that the abuse continued until June 2021, after Chatfield had left the state government due to term limits. She told her husband – Lee Chatfield’s little brother, Aaron Chatfield, who she said she was pressured to marry when she they were both 19-years-old – and he supports her.

Aaron Chatfield said that he worked as his brother’s driver when he was in the state legislature.

“Lee portrays himself as a family tradition, conservative guy who believes in the Bible and the Bible is so important,” he said. “No, it couldn’t be further from who my man was as a person.”

He said that he would drive Lee Chatfield to meet with women and to strip clubs, and that Lee Chatfield had frequent contact with a former staffer.

But Lee Chatfield now denies the alleged assault, saying that the victim was an adult and that they had a relationship. He said he “deeply regrets” the “great pain” he caused his wife and family because of his multiple affairs.

“Their affair lasted for years, but they were both consenting adults,” Lee Chatfield’s attorney Mary Chartier said. “Mr. Chatfield deeply regrets the decisions he has made. It has caused great pain to his wife and family, and they are working through this together. But he did not assault this woman in any manner during their years-long adult relationship. He intends to vigorously fight these false claims.”

“She was a child,” said Jamie White, the alleged victim’s lawyer. “She was not of the age of consent…. The idea that he rose to the highest levels of our state government is just appalling to me. We have to take a look at how that happened.”

The age of consent in Michigan is 16-years-old. Third-degree sexual assault, however, still applies if the victim is under the age of 18 and the perpetrator works at the victim’s school.

This is not the first time Lee Chatfield has had trouble with the law. In 2018, he tried to bring a loaded gun on a plane but it was found in his carry-on bag at an airport in northern Michigan. He later apologized and paid a fine, saying it was an “inexcusable mistake.”

After leaving the state legislature, Lee Chatfield got a leadership position at the economic development firm Southwest Michigan First. But just a few days after he started his job there, he was forced to resign as corporations criticized one of his biggest achievements in government: preventing LGBTQ people from having civil rights.