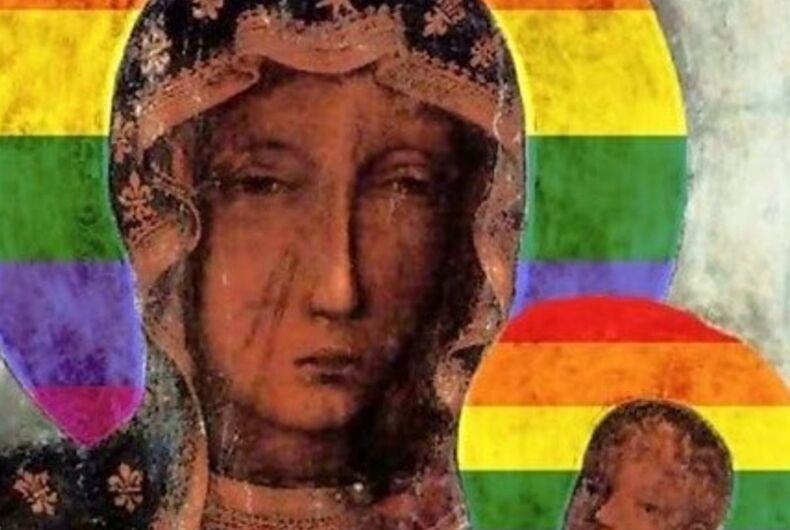 Closeup from the stickers and posters distributed by the three womenPhoto: Screenshot

Three Polish women who distributed posters of the Virgin Mary with a rainbow halo have emerged victorious after a court ruled in their favor.

The women – Elżbieta, Anna and Joanna – had previously been acquitted, but the prosecutors appealed. Today, the court rejected that appeal.

The battle has been going on since 2019, after the women began putting up posters and stickers of the rainbow image to protest the treatment of LGBTQ people in the country.

“Nobody should be excluded from society,” said Elżbieta at the time. “Sexual orientation is not a sin or a crime and the Holy Mother would protect such people from the Church and from priests who think it is okay to condemn others.”

After their protest began, then-Polish interior minister Joachim Brudziński announced the arrest of one of the women, saying she was detained for “carrying out a profanation of the Virgin Mary of Częstochowa.” The Black Madonna of Częstochowa is a Byzantine icon that is housed in the country’s holiest Catholic shrine.

“Offending religious feeling” is a crime in Poland punishable by up to two years in prison.

“Telling stories about freedom and ‘tolerance’ doesn’t give anyone the right to offend the feelings of believers,” Brudziński said, adding that the paintings are “cultural barbarism.”

The fight for LGBTQ rights in Poland continues to be an uphill battle.

“This case is emblematic of a number of disturbing anti-human rights trends in Poland,” wrote Amnesty International, which has been leading a campaign in support of the women.

“Not only is space for free expression, activism and peaceful protest shrinking, but the climate of homophobia in the country is worsening amid an increase in hate crimes, the introduction of LGBTI free zones by local councils and attempts to ban Pride Marches.”

The organization called it “bitterly ironic” that the women’s peaceful activism meant to shed light on these issues led them to spend years in courts and face potential jail time.

“Today’s decision comes as a huge relief but cannot disguise the fact that these three women should never have been put on trial in the first place,” the organization’s senior campaigner for Europe, Catrinel Motoc, in a statement.

“Distributing posters of the Virgin Mary wearing a rainbow halo should never be criminalized, so it is right that the appeal against their acquittal was rejected.”

There’s a national blood crisis. It doesn’t have to be that way.