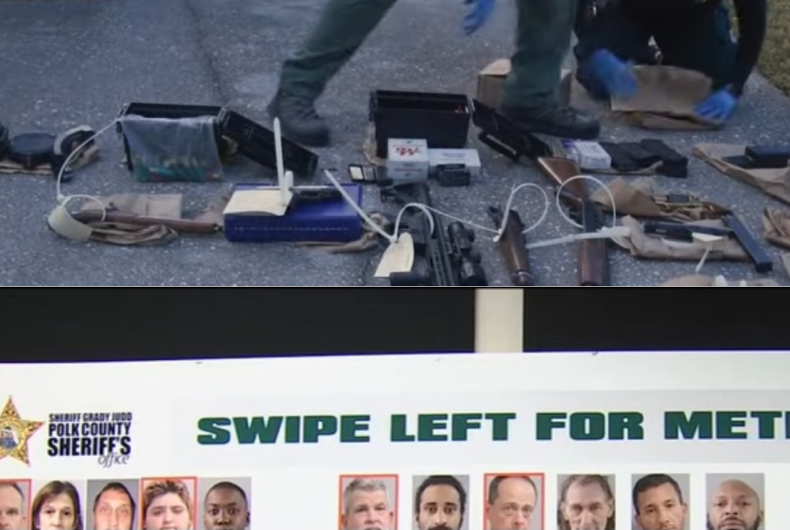 While drug and narcotics transactions being facilitated through dating services is not new, with more documentation and growing popularity of them in recent years, law enforcement has begun to catch on.

The Polk County Sheriff’s Office in Florida conducted a series of sting operations — ineptly deemed “Swipe Left for Meth” — focused on dating apps for LGBTQ people including Grindr, Scruff and Taimi, although two of the three apps do not primarily include a swiping feature and meth was not the primary substance found during the sting. The Sheriff’s Office reported that after six months, his office arrested about 60 people and filed 159 felony and 72 misdemeanor charges in total against them. They also issued arrest warrants against eight other people and search warrants on three addresses.

“No one hit us up for a date, it was all about selling drugs,” Sheriff Grady Judd said at a press conference this week. “It was a shock to us, they were openly advertising.”

Judd authorized the operation after sheriff’s deputies learned about drug dealers on dating apps by a tip they received via the Heartland Crime Stoppers tipline.

“We’ve known for some time that suspects will use the Internet and social media to prey upon children online, or to engage in prostitution, but this is something we are seeing more and more of in Polk County – suspects who are using dating apps to sell illegal narcotics,” Judd said.

The sheriff expressed that he was surprised by the terms used by those selling drugs or looking to buy drugs online, including “Tina” and “ice cream.”

Judd also argued that it’s dangerous for applications to allow people “brazen enough to… openly sell drugs on an app that anybody – to include children – can have access to,” although minors are not allowed on most dating apps, including the three used by the Sheriff’s Office.

Still, Judd claimed his office is “working with these mobile app companies to raise awareness, and asking for their cooperation during our investigations.” He also noted that some other users were “reporting illegal drug sales when it became apparent to them, and the mobile app companies were banning some suspects attempting to sell drugs.”

In a statement published by NBC News, Grindr said, “Our moderation team works hard every day to ban bad actors while maintaining the privacy and security of our users.” They have previously banned “the promotion of drug use” on their app.

Taimi told NBC News that with algorithm and moderation teams, the app is doing “its best to prevent any illegal or aggressive activity against users.” Scruff declined to comment to the publication.

Despite the operation’s misleading name, the sheriff said the most common substance his office received during their stings was marijuana. In addition to that, cocaine, LSD, methamphetamines, heroin and other drugs, deputies also seized 14 firearms throughout the operation. One person during the operation was additionally charged with assaulting a law enforcement officer.