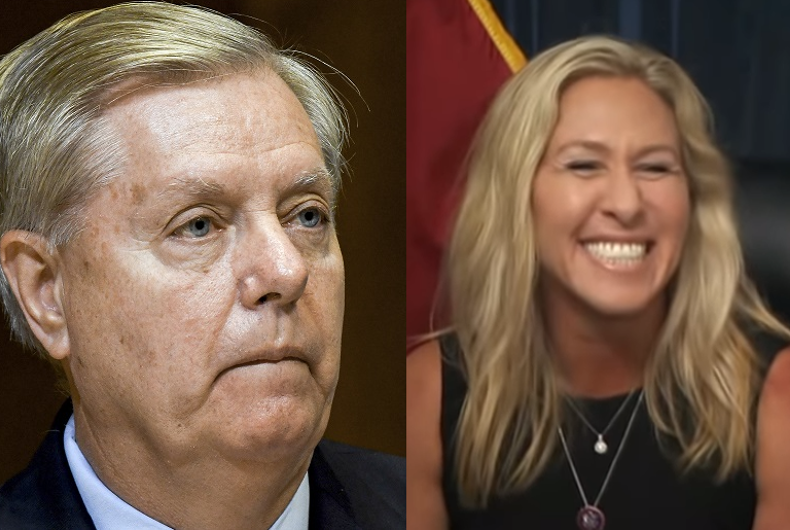 Rep. Marjorie Taylor Greene (R-GA) laid into Sen. Lindsey Graham (R-SC) because he  “doesn’t care” about how Capitol insurrectionists are being “abused in the DC jail because they are white, male, and voted for the very president that [Graham] supposedly supports.”

Greene was writing on the rightwing social media app Telegram about comments Graham made on CBS’s Face the Nation yesterday, where he criticized Donald Trump for promising to pardon the Capitol insurrectionists if he wins the White House in 2024.

“If I run and if I win, we will treat those people from January 6 fairly,” Trump said at a rally last week. “And if it requires pardons, we will give them pardons.”

“I don’t want to send any signal that it was OK to defile the Capitol,” Graham said on CBS yesterday. “There are other groups with causes that may want to go down the violent path if these people get pardoned.”

“He doesn’t care about our justice system being completely violated by Democrats in their political war against Republicans and President Trump,” Greene said about Graham later that day. “I guess Lindsey Graham doesn’t care about being presumed innocent until proven guilty.”

The reason she cares about these inmates is that they’re white and Republican. But instead of showing some awareness of how U.S. prisons – especially the D.C. jail – are human rights messes for most people who get locked up, she effectively denied that inmates of color are often treated as poorly – or worse- than the alleged Capitol rioters.

“Instead of actually doing something about the great injustice happening to pretrial Americans awaiting their day in court, Lindsey Graham turns his head to their abuse, votes for Joe Biden’s nominees, votes for Joe Biden’s Infrastructure bill, and then pretends to be a friend to President Trump. Aren’t we all sick and tired of those kind of ‘friends.'”