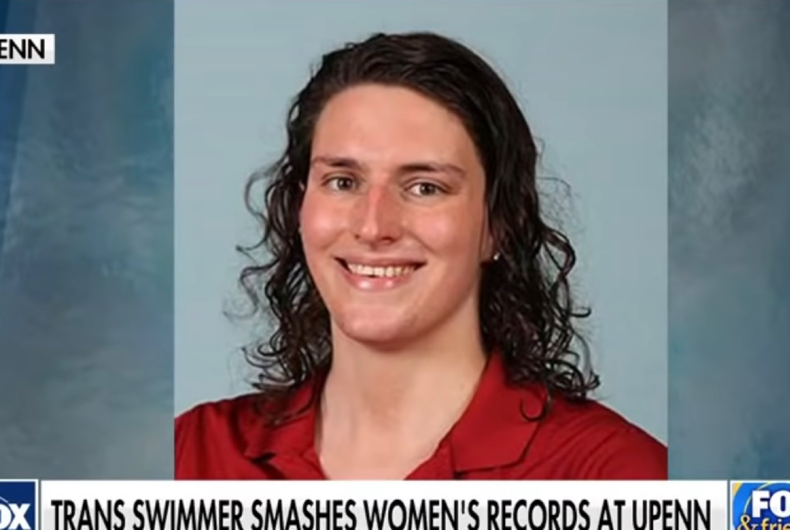 Anti-trans conservatives continue to attack collegiate trans swimmer Lia Thomas, and now the Ivy League itself is standing up for her.

Thomas, who has been breaking records at the University of Pennsylvania, has faced intense scrutiny and criticism, despite the fact that she has has followed NCAA guidelines for trans athletes.

On Twitter yesterday, the Ivy League released a statement emphasizing that Thomas is welcome in women’s swimming.

“Over the past several years, Lia and the University of Pennsylvania have worked with the NCAA to follow all of the appropriate protocols in order to comply with the NCAA policy on transgender athlete participation and compete on the Penn women’s swimming and diving team,” the statement said. “The Ivy League has adopted and applies the same NCAA policy.”

It went to reaffirm “its unwavering commitment to providing an inclusive environment for all student-athletes while condemning transphobia and discrimination in any form.”

The Ivy League releases the following statement of support regarding Penn's Lia Thomas' participation on the women's swimming and diving team. 🌿 pic.twitter.com/wdEDW4ud5O

On the same day, Penn Athletics also released a statement in support of Thomas.

“Penn Athletics is committed to being a welcoming and inclusive environment for all student-athletes, coaches, and staff and we hold true to that commitment today and in the future,” it said.

It then explained that Penn is a member of the NCAA and abides by its policies.

“Lia Thomas has met or exceeded all NCAA protocols over the past two years for a transgender female student-athlete to compete for a women’s team. She will continue to represent the Penn women’s swimming team in competition this season.”

These statements of support come in the wake of intense transphobic vitriol that has been hurled at Thomas since she began to make headlines for her success on the team.

Publications like Newsmax, Daily Mail, the Washington Examiner, Washington Times, and even local news broadcasters have used Thomas to attack the inclusion of a trans woman in sports. San Diego local channel KUSI-TV claimed it is “unfair” for Thomas to participate, while Fox News syndicated OutKick‘s article and had OutKick founder Clay Travis on Fox & Friends to share his argument against her inclusion.

Anti-LGBTQ activists and influencers such as Piers Morgan, Jesse Kelly, and Megyn Kelly have criticized her participation in sports as a woman. Many have accused Thomas of transitioning just so that she can dominate in women’s sports.

And in late December, a USA Swimming official named Cynthia Millen resigned after 30 years on the job in protest of Thomas’ participation on the Penn women’s team. Millen has continuously spoken out against Thomas, misgendering her at every opportunity and claiming she will be the end of women’s swimming as we know it.

“I told my fellow officials that I can no longer participate in a sport which allows biological men to compete against women,” Millen wrote in her resignation letter. “Everything fair about swimming is being destroyed.”

Thomas has said she is doing her best to drown out the noise.

“I just don’t engage with it,” she said in an interview with SwimSwam earlier this month regarding the backlash to her inclusion. “It’s not healthy for me to read it and engage with it at all, and so I don’t, and that’s all I’ll say on that.”