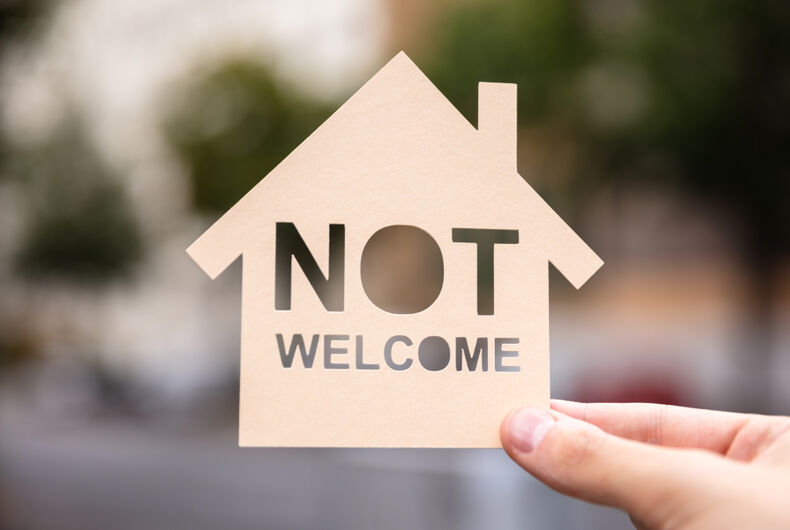 A British couple who call themselves Christians listed their home for sale, but controversy has erupted after they refused to allow a gay couple to look at the property – let alone buy the house.

The two are not “ashamed of what we said in any way,” Luke Main insists, saying that he and his wife, medical physicist Dr. Joanna Brunker, will stand firm on the side of exclusion and bigotry.

Related: His grandparents found out he’s gay from a news article. So they sent him an email about it.

When Luke Whitehouse and his partner, Lachlan Mantell, messaged the couple about the three-bedroom house, they were shocked at the response. Not only did the couple state they wouldn’t sell to a gay couple, citing fire and brimstone Bible verses that describe gays and lesbians as “depraved,” they wouldn’t even allow them inside to look at it.

“We’re sorry if we seem intrusive, but we just want to make clear that we would be unwilling for two men in a partnership to view or buy our house,” Main and Brunker replied after asking the men to explain their “circumstance.” The message continued, saying homosexuality is “contrary to the gracious teaching in God’s Word.”

The couple has previously written to politicians to urge them to discriminate against LGBTQ people. One message to a House of Lords committee claimed that children were “being stolen from their parents and sold to state-decreed way of thinking.” They were outraged that “non-traditional families” and “relationships” would be presented as normal in schools.

“Initially for the first 10 seconds, I laughed. I thought it was a joke.” Whitehouse told the Daily Mail. “But then I was upset and angry and I had a cry on the phone to my mum. Homophobia still exists, it is still out there. I did not see it coming. I was blindsided by it.”

Main and Brunker’s listing agent, the website Purplebricks, quickly dropped the listing, saying the couple’s response to the men was inappropriate. The company was unaware of the response until Whitehouse contacted them.

“The sentiments expressed in this message are completely opposed to Purplebricks’ views and values,” the company said in a statement. “We have contacted the seller to return their fee and request that they sell their property with a different agent.”

Whitehouse and Mantell, who were separated on different continents due to COVID travel restrictions, insist they’ll still find a home in the area. But it won’t be Main and Brunker’s house.

LGBTQ Nation is going on the road to Guerneville