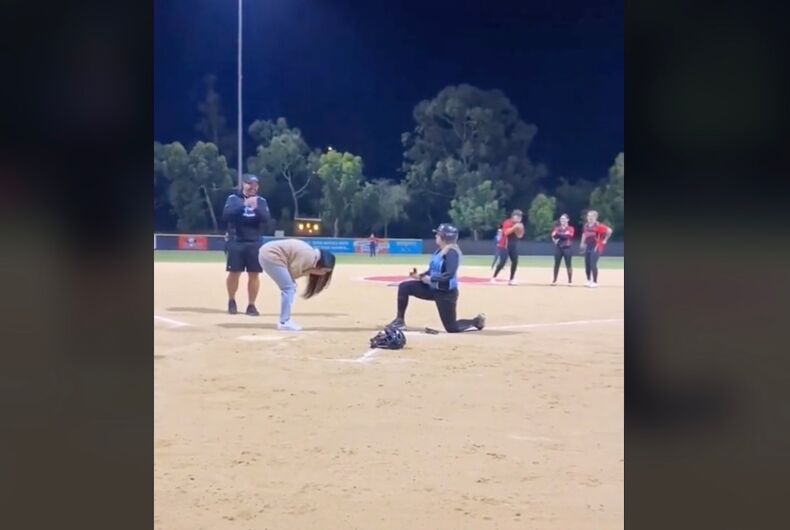 An epic lesbian proposal has gone viral on TikTok for its sheer adorableness.

Sara Riou pulled off the proposal of a lifetime to her partner, Jacinta Comande, in the middle of Riou’s softball game in Perth, Australia.

Related: Celebrities who proved themselves to be LGBTQ allies in 2021

In the video, posted to Comande’s TikTok page, Riou pretends to get hit by a ball while at bat and falls to the ground, faking immense pain. The coach then calls Comande out to the field from the stands to allegedly check on Riou and make sure she’s okay.

But when Comande arrives at home plate, Riou sits up and shifts to being on one knee. She pulls out a ring and Comande cannot believe it.

Friends and family in the stands, along with teammates and those on the other side, all applaud while the newly engaged couple embraces and kisses.

Comande posted the video with the caption, “The most epic proposal I could have ever dreamt of,” and told Riou, “I love you endlessly.” It has since raked in almost 2 million likes and over 15,000 comments.

The video also made its way to the Twitterverse, where it is being met with equal enthusiasm.

“I consider myself a lesbian bon vivant,” one user wrote, “and in my 41 years of lesbianing, I thought I had seen it all. but no, I had not.”

I consider myself a lesbian bon vivant, and in my 41 years of lesbianing, I thought I had seen it all. But no, I had not: pic.twitter.com/BBkZejBgEX

Even celebrities have joined in to celebrate the couple. Soccer star Abby Wambach retweeted the video and wrote, “Well…this has me in happy tears!!! Congrats y’all.”

Well… this has me in happy tears!!! Congrats y’all. https://t.co/9ubWHK6KSb

Comande has since followed up on TikTok to answer some questions about how Riou pulled it off. She explained that the catcher on the other team is her best friend, and that the coach was in on it too.

Comande also explained that Sara did play in the rest of the game, and then shared photos of the two of them enjoying a drink on the field together when it was over.

♬ Promise Me You’ll Always Be Mine – Markus Hughes