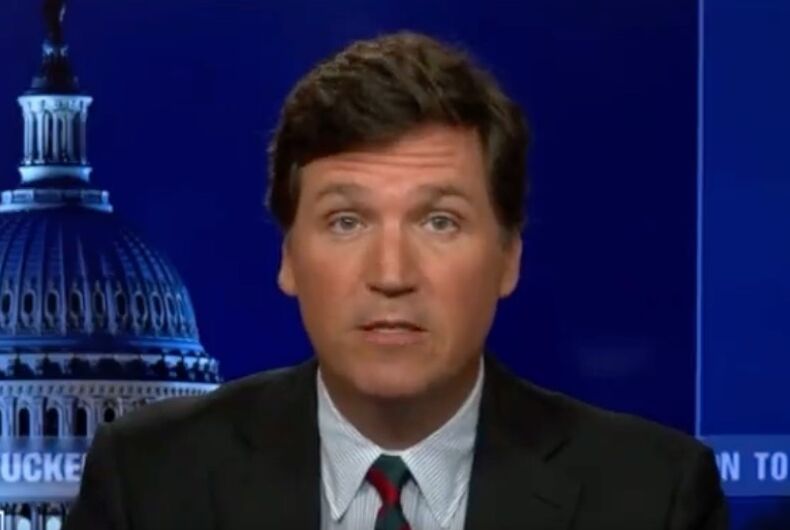 Tucker Carlson, Fox News’ most odious host, may not have marked a new low on last night’s show since his greatest hits include blatant racism, anti-LGBTQ remarks, and yellow journalism.

But accusing a sitting congressman of having “multiple chlamydia infections” while urging his viewers to effectively kill themselves may be a milestone worth noting.

In a piece about coronavirus vaccines and Sens. Elizabeth Warren (D-MA) and Cory Booker (D-NJ) recent announcement that they had contracted the new Omicron COVID variant, Carlson pointed out that both Democrats were fully vaccinated – including their booster shot. People who have been vaccinated have a dramatically lower chance of being hospitalized or dying from the coronavirus and both senators have said they are not experiencing any symptoms.

But in a curveball, Carlson roped in Rep. Eric Swalwell (CA), a Democrat who has taken the pandemic seriously.

“Senators Cory Booker and Elizabeth Warren announced the other day that they have COVID and are now in quarantine. And of course, we wish them the best, sincerely,” Carlson said. “But you can’t help but notice that between them, Booker and Warren have had at least 6 vaccine injections and now they’re sick.”

“So, what is the lesson here, exactly? Well, the lesson that Eric Swalwell is drawing from all of this is that unvaccinated Americans should be banned by law from flying on airplanes in their own country.

“He announced that last night on Twitter,” Carlson continued. “Now, the airlines disagree with this. They’ve thought a lot about it. So does any sane physician, they have to.”

“But Eric Swalwell, who’s probably the most physically unclean member of Congress, now imagines himself a public health official with the power to make these decisions.”

“So, before we go any further and grant Eric Swalwell that power, we probably ought to see his medical records,” the sniveling host added. “It’d be kind of ironic if a guy with multiple chlamydia infections was lecturing the rest of us about how to keep safe from a virus. We await that data.”

Carlson has repeatedly downplayed coronavirus prevention efforts and the vaccines; he is one of the biggest sources of COVID misinformation being spoonfed to Fox viewers. There is also no indication that the Congressman has had multiple sexually transmitted infections.

On a flight now to Bay Area and it is one-hundred percent batty that the unvaccinated are allowed to fly. It’s unsafe in the cabin and we are transporting the virus. Requiring the vaccine to fly is the LEAST we can do to stop the spread.

I guess this is how he gets ratings from demented viewers. Tucker Carlson throws out wild, meaningless allegations against member of Congress, with no evidence. Says Rep. Eric Swalwell is “the most physically unclean member of Congress” & has had “multiple chlamydia infections”. pic.twitter.com/2ikry1vAMz

Straight people aren’t as straight as they might think