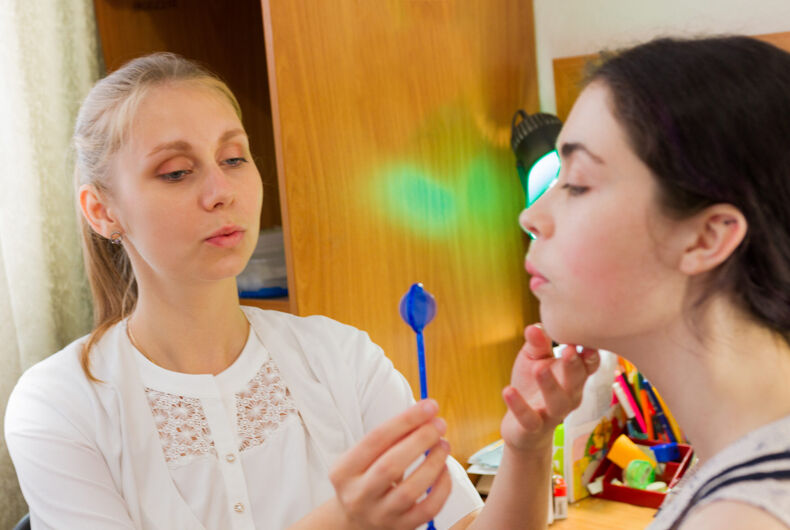 For a lot of transgender people, their voice is a major source of gender dysphoria, which is a feeling of significant distress or impairment that stems from a strong desire to be another gender. As such, many trans men and women opt to seek out voice training, which helps them achieve the kind of voice that feels closer to how they identify and eventually relieves some of that distress that they experience.

If you’ve ever been interested in voice training, keep reading. Here, we cover everything you need to know about trans voice training, from how it works to which apps and sites you should visit to get started.

Related: Eddie Redmayne says it was a mistake to play a trans woman in “The Danish Girl”

What Is Trans Voice Training?

Trans voice training, also known as vocal therapy, is a series of guided vocal exercises most often led by a speech pathologist or a voice coach. These voice exercises help transgender people find the right techniques to modulate their voices and adjust their speaking patterns to better reflect their gender identity.

While both trans men and trans women can undergo vocal training, trans women and transfeminine people are more likely to seek it out. This is because when trans men take testosterone via hormone replacement therapy (HRT), their body goes through something close to typical male puberty.

Their vocal cords or vocal folds will thicken, making their voice sound deeper. Some trans men can and do elect for voice training to better practice how to sound like a guy, but generally speaking, they need less help masculinizing their voices.

Unfortunately, the same process of male puberty that helps trans men develop a deeper voice is what leads trans women to have difficulties with their own voices. For trans women, HRT won’t affect their voice, and how their voice sounds pre-HRT is how it will sound after they go on hormones. So if you’re a trans woman who has developed a particularly deep voice after puberty, you will need to either work with a vocal coach to learn how to practice speaking in a higher pitch or you can elect for vocal surgery.

With all that being said, for this guide, we’ll be focusing primarily on voice feminization training.

Everyone has their own unique relationship with their natural voice. Some trans women are comfortable having a naturally lower pitch and strong voice, while for others, it can be a source of discomfort and even shame. Here are three reasons why some people elect for voice training:

Have you ever played back a recording of yourself, only to find that your normal voice is not exactly what you expected it to sound like? For trans people, that feeling is a hundred times worse. Voice dysphoria can, at times, make trans people feel like they don’t belong in their own bodies, and that can lead to a lot of self-hate and shame. Because of this, some trans people even go so far as to avoid speaking on the phone.

Trans people, trans women especially, face a disproportionate amount of discrimination for their gender identity. In 2020 alone, 50 trans women were reportedly killed in violent incidents. As such, “passing”, or having the ability to be perceived as cisgender, is important to a lot of trans people. And with a higher-pitched voice, trans women can feel better prepared to handle potentially dangerous situations without the looming threat of being “found out”.

Vocal Surgery Success Is Not Guaranteed

If you want to make your voice sound more feminine, you can opt for voice feminization surgery, which involves shortening the vocal cords for a more high-pitched voice. It also narrows the airway to help you produce a breathier sound that is more commonly associated with women.

Unfortunately, voice surgery comes with a lot of drawbacks, especially for trans women. For one, it can be incredibly expensive, ranging from $5,000 to $10,000 in the US.

On top of this, vocal surgery is a risky procedure with a variable success rate. Some patients may not feel satisfied with the voice they are left with, while others may even experience difficulty breathing and swallowing, as well as persistent infections and sore throats.

Finally, vocal surgery will only make a trans woman’s voice higher in pitch. However, it doesn’t change other vocal behaviors such as intonation or pacing.

Trans voice training is usually done over a series of weekly sessions held over a few months or even years. You’ll want to get the help of speech pathologists or vocal coaches, as these people have scientifically-backed techniques on how to make your voice higher, how to make your voice deeper, or simply find the voice that feels like “you”.

Sometimes, your speech coach will encourage you to join a group session so you can practice your techniques in a conversational setting. Some lessons also combine singing, psychotherapy, and physical therapy.

Pitch is what makes your voice sound deeper or higher. Most people who are assigned female at birth have a pitch somewhere in the realm of 160 to 300 hertz, while those who are assigned male at birth will have a range of 60 to 180 hertz. Variations occur depending on the person’s height, age, and other factors.

This is a voice quality that describes the brightness or darkness of a voice. In other terms, it is the difference between a chest voice and a head voice. Resonance can be changed with minute adjustments to the way one uses their neck muscles.

There are four types of resonance:

This is a general term that covers things like articulation, pacing, breath control, and phrasing.

Articulation is how you form sounds when you speak. Men and women tend to articulate differently, with women articulating vowels and consonants more clearly.

Pacing, on the other hand, is how fast or how slow people speak. Women tend to speak faster than men. While voice surgery can potentially change one’s pitch and resonance, it is only through vocal therapy that you can change your speech patterns and learn how to sound like a girl.

How Does Masculinizing Voice Training Work?

What Other Sounds Are Tackled In Trans Voice Training?

Aside from all the speech and vocal elements mentioned above, a vocal or speech coach can also help you change the way you make certain sounds, including:

Is Voice Training Covered By Insurance?

In the United States, voice training and vocal surgery are NOT covered by medical insurance. This is because the two procedures are considered “elective processes” and are not deemed medically necessary.

3 Feminizing Trans Voice Training Apps And Sites You Can Try

Because voice training and vocal surgery aren’t covered by insurance, they can be out of reach for a lot of low-income trans folk. Thankfully, there are a handful of vocal training apps that are available either for free or for a much lower rate than most face-to-face training sessions.

The Exceptional Voice App, or Eva, is perhaps the most well-known vocal training app on the market. Developed by a speech pathologist named Kathe Perez, who has over 20 years of experience working with transgender voices, Eva is designed specifically for transgender people.

With Eva, users can watch instructional videos and participate in structure exercises with real-time visual feedback. With clearly-defined objectives and a reward system, Eva operates somewhat closely to a game, thus easing some of the stress and anxiety associated with vocal training.

The Christella VoiceUp app is a vocal feminization app developed by leading transgender speech and language therapist, Christella Antoni. The app offers “bite-sized lessons” spread over three courses, resulting in over two hours of therapy. The lessons will teach you how to make your voice sound more feminine by focusing on areas like pitch, resonance, intonation, and vowel length.

According to the site, Christella’s technique focuses directly on modifying aspects of voice and speech based on “vocal tract physiology”, which allows clients to maintain more vocal consistency and develop stamina.

TransVoiceLessons is the brainchild of trans woman, audio engineer, and voice expert Zheanna Erose. Zheanna offers free educational materials through her YouTube channel and website and is known for her detailed and rigorous lessons on vocal training.

Not everyone is a fan of voice training. One of the most common criticisms about the exercise is that it has the potential to reinforce certain stereotypes about how women speak and act. To some critics, vocal training can promote this notion of an “ideal” feminine voice, whereas, among cisgender women, there is a ton of vocal range variations.

There are also critiques that vocal feminization therapy promotes the idea that, in order to feel complete with one’s gender identity, a trans woman must “pass” in all aspects, including her voice. This harmful notion can lead many trans women to feel that if they can’t change their deep voices or develop a more high-pitched voice and resemble that of a cisgender woman, it invalidates their womanhood.

However, a lot of pathologists make an effort to remind their students that passing does not necessarily have to be the end goal. For many, the goal is simply to relieve one’s dysphoria and to help patients find the voice that feels like “them”.

While transition is different for everyone, for many trans people, vocal training can help reduce the distress brought upon by gender dysphoria and bring them one step closer to feeling at peace in their bodies. Voice training does have its drawbacks, and the criticism against it is understandable. But for those who simply want to feel closer to the person that they envision themselves to be, voice training can be an incredibly empowering and freeing tool.

Related:  Queer teens are less likely to get the health care they need. Here’s how pediatricians can help.

7 amazing LGBTQ holiday cards we found on Twitter this year

5 good things that happened to the LGBTQ community this year