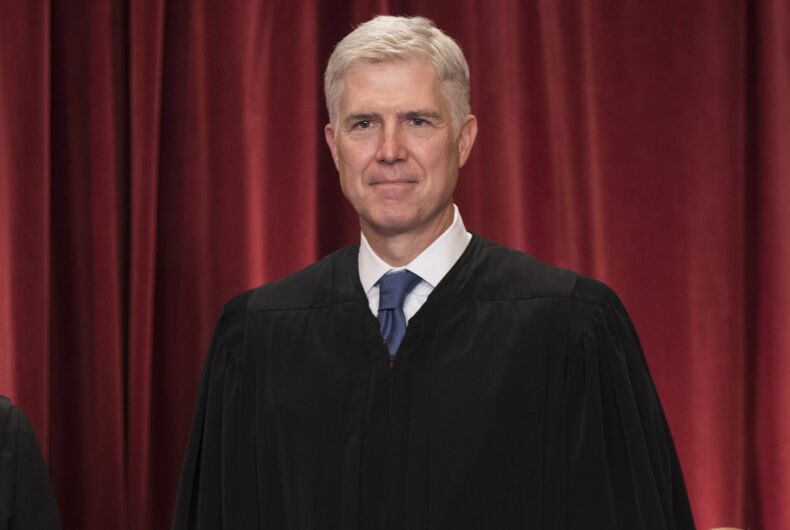 In a dissenting opinion, Supreme Court Justice Neil Gorsuch uses the Court’s decision in favor of an anti-gay baker to support his belief in religious exemptions to vaccine mandates.

In the case of Dr. A v. Hochul yesterday, the Court upheld the state of New York’s mandate that all health care workers be vaccinated against Covid-19, regardless of religious beliefs.

Gorsuch disagreed that the state had a right to enforce vaccine mandates for everyone and wrote a scathing 14-page dissent to the decision in which he quoted the decision in Masterpiece Cakeshop v. Colorado Civil Rights Commission.

The bakery owner, Jack Phillips, refused to sell a wedding cake to a gay couple, leading the Colorado Civil Rights Commission to take action against him.

Phillips argued he should be allowed to refuse service based on his strongly-held religious beliefs against homosexuality since, he argued, he knew that the cake would end up being used at a same-sex wedding. He said that his constitutional rights were being violated by being “forced” to treat a same-sex couple on par with mixed-sex ones.

The Supreme Court found for Phillips in a narrow ruling against Colorado, saying the Commission did not act neutrally in the case with regards to Phillips’s religion. The Court did not rule on the overall issues of religious freedom, anti-discrimination laws, and free speech as a whole.

In his dissent for the vaccination case, Gorsuch quoted the Masterpiece Cakeshop decision, where it said the state of Colorado executed “official expressions of hostility to religion” and thus violated the Free Exercise clause of the constitution.

He also quoted a part of the decision that said the government “cannot act in a manner that passes judgment upon or presupposes the illegitimacy of religious beliefs and practices.”

And again, Gorsuch cites the Masterpiece decision to say that the government mandates without religious exemptions should be thrown out “if there is even ‘slight suspicion’ that those actions ‘stem from animosity to religion or distrust of its practices.’”

In Gorsuch’s view, there is more than a “slight suspicion” that New York Gov. Kathy Hochul (D) acted with animosity toward religion by denying unemployment benefits to those health care workers who lost their jobs due to noncompliance with the vaccine mandate.

Many have criticized Gorsuch’s opinion.

“When a supreme court Justice includes misinformation and lies in his dissent about the #covid19 vaccine, it’s clear he (Neil Gorsuch) is corrupted by the idea of religious freedom from vaccines,” wrote Scott Huffman (D), a Congressional candidate in North Carolina, on Twitter. “For Christ’s sake, this vaccine has saved billions of people from death.”

When a supreme court Justice includes misinformation and lies in his dissent about the #covid19 vaccine, it's clear he (Neil Gorsuch) is corrupted by the idea of religious freedom from vaccines. For Christ's sake, this vaccine has saved billions of people from death.

“Those transparently insincere beliefs aren’t religious,” Li wrote. “They’re the ravings of an ignorant deluded base fed lies by the people who put Gorsuch in power.”

In a hostile dissent, Gorsuch calls it “fear and anger at those who harbor unpopular religious beliefs”

Those transparently insincere beliefs aren’t religious. They’re the ravings of an ignorant deluded base fed lies by the people who put Gorsuch in powerhttps://t.co/oaG8fAKtxk

Ben Eidelson, an assistant professor at Harvard Law, referred to Gorsuch’s use of “slight suspicion” as “one of the most brazen abuses of quotation marks in a [Supreme Court] opinion that I can remember.”

Gorsuch's invocation of a "slight suspicion" standard here is one of the most brazen abuses of quotation marks in a SCt opinion that I can remember. Here's a side-by-side (note "set aside" came on next pg in Masterpiece, after reviewing evidence & finding actual "hostility") pic.twitter.com/napZXxiOoX