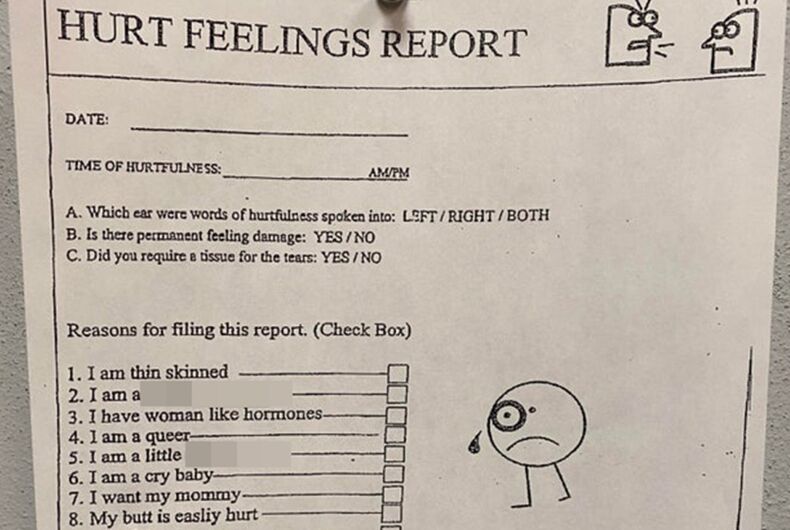 A closeup of the offensive "hurt feelings report" found in an employee breakroomPhoto: Reddit

A supposed employee complaint form reportedly found in a company breakroom is sparking outrage online. The sheet of paper calls itself a “hurt feelings report” and includes several anti-gay and sexist slurs.

The derogatory posting is obviously not an official corporate document. It has circulated for years, but for some reason, people took it seriously this time.

Related: Texas library will close for 3 days as librarians forced to hunt for kids’ books about LGBTQ issues

The paper asks questions like “Is there permanent feeling damage” and “Did you require a tissue for the tears?”

It also lists several incredibly vile reasons why the report is being filed, including being a “pussy,” “queer,” or “little bitch,” and “my butt is easily hurt.” It also asks the name of the “real man” who committed the offense.

It asks for the name of the “sissy” filing the report and the “girly man signature.”

“We, as a company, take hurt feelings very seriously,” it reads. “If you don’t have a mommy that can give you a hug and make it all better, let your supervisor know and we can provide you with a surrogate. If you need them, diapers, midol, and a ‘blanky’ can also be supplied.”

Photos of the paper posted on Reddit quickly drew condemnation, but several seemed to think it was an official corporate form. A similar form that purports to be a military report includes most of the same language while adding other reasons for filing the report like “I have woman/man-like hormones.”

“This is discriminatory to so many people, that cannot be legal,” one person responded. “That poster alone created a hostile work environment.”

“Take a pic for documentation to a lawyer. This is a hostile work environment,” someone else added underneath the photo of the form.

Others say it for what it was: plain garden variety sexism and homophobia dressed up as “humor.”

“This is homophobic to an extreme,” one person said simply.

Straight people aren’t as straight as they might think

Mrs. Claus was the face of feminism in the 19th century. She didn’t need a man to get the work done.