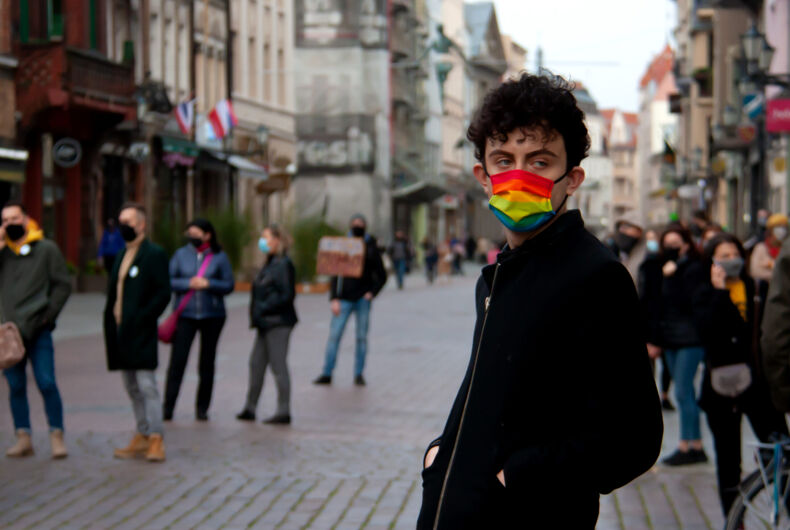 While not everyone’s coming out stories are all sunshine and rainbows, it’s important to understand how much the world is progressing, and that there are so many accepting people out there.

Read these positive coming out stories and let them comfort you in times of fear.

Related: Straight people aren’t as straight as they might think

After 33 years of insisting he would never come out until he had a boyfriend Adam, inadvertently, came out to his family on Coming Out Day last year.

“In hindsight, I couldn’t have been ready to get a boyfriend until I’d come out,” he said.

“My parents only told me they were ‘relieved and proud,’ which I always knew they would be. The only person who wasn’t proud was me. Since then, my life’s turned around, impressively so considering most of that time has been taken up by a global pandemic.”

Adam has since dedicated time to researching deeply into the shame he had been holding on to with various LGBTQ books. This allowed him to sharpen the tools to recognize when that shame is creeping back in, and finally looking forward to life as a gay man.

“12 months on, I have also fallen in love with my very first boyfriend, which I know couldn’t have happened little more than a year ago.”

Kitty is queer, and thought they were gay for a long time before realizing that they could be bisexual. They were a loud, proud bisexual for 13 years before coming to terms with being non-binary two years ago. They then removed what felt like a ‘rigid’ label of ‘bisexuality’ after realizing ‘queer’ felt more neutral and comfortable.

Their dad thought their queerness was a phase when they were young, before coming to realize their sexuality wasn’t a ‘phase’ or a ‘trend.’

It’s now just a normal thing in their family, as it is for their brother, Jamie, who is gay and does drag.

“My dad is Catholic, but he goes to all my brother’s drag shows and fully loves us both. My mom has literally called out children who use words like ‘gay’ as a slur. One time, my 10-year-old brother was playing with his friend in the garden, who kept calling everything ‘gay.’ My mom shouted at him, ‘Hey, you got a problem? We don’t use gay to mean stupid in this house. If I hear you say that again, you can go home.’ I hate to think we are some lucky minority that didn’t get ostracized when we came out.”

Sol first started questioning their gender and sexuality in high school when they had their first crush – a trans girl.

“She was the first person I knew to introduce me into the LGBTQ world, and she was the first who told me that my feelings are valid and normal. She didn’t feel the same for me, but at least we became close friends after that,” she shared.

They ended up developing into depression, and their parents didn’t know why or what was happening.

“I already knew that I liked girls too, but something was missing. Something didn’t feel right. After a year of therapy with a specialist in LGBTQ people, she suggested that I might be non-binary. So, I started searching online and talking with non-binary people all over the world to get some information. In July, on Non-binary Day, I came out to my friends!”

Their friends showered Sol in love and support, and she felt so overwhelmed and grateful. This gave Sol the courage to come out to their parents months later.

“They took it well, and we had a deep conversation that lasted about two hours. They told me that they already suspected I was out of the ordinary, so it wasn’t a total surprise. They’re also both teachers so they knew about this type of stuff, since they have LGBTQ kids in their schools,” Sol said.

Since coming out to their parents, Sol feels happier than ever, and plans on telling the rest of her family with time.

Sadia struggled with her sexuality for a while, thinking she could be a lesbian but knowing they were attracted to men. Floating in the unknown area made them more nervous and worsened her depression at the time.

Now very secure with her bisexuality, Sadia has come out to most of their friends and some of her family. She’s learned that coming out is a life-long process, and has had her fair share of good and bad reactions. However, the most memorable ones are the ones that made them feel safe and accepted.

“A friend I’d just met in summer school immediately brightened up when I came out to her and, in the most normal way, asked me, ‘Are you attracted to Megan Fox bisexual or attracted to Cate Blanchett bisexual? Because that will explain a lot.’ I immediately started laughing hysterically and told her that most bisexuals are attracted to both of them because ‘there was no way a bisexual woman wasn’t crushing on a minimum of 15 female actors at all times.’ Her reaction felt so refreshing and unique because I was coming out to someone who was not only a nice person, but an LGBTQ ally. She understood how tiring it was to hear the same ‘I’m so happy for you’ and ‘you’re so brave’ reactions because, even with the best of intentions, those only remind me of how many more times I’ll have to come out in later life.”

As of now, Sadia feels proud of her sexuality and has stopped placing boundaries around it. They’ve found a lot of joy in their queerness since starting to live openly, and her only hope is that she encounters more loving reactions like their friend’s who was not only accepting, but made an effort to understand.

“I’m 40 years old and I came out to my parents 22 years ago accidentally by email,” says Heather.

After being elected LGB officer at university, she added the title to her email signature, but one time forgot to delete the signature when sending an email home. Heather wasn’t at home when the email was received, but immediately received a phone call from her sister, who laughed as she recalled what had happened.

“My mom asked what ‘LGB’ stands for and my dad had already evidently guessed without me telling him, and informed her it means ‘lesbian, gay, bisexual.’ ‘That doesn’t mean our Heather’s… she’s not is she?’ asked my mum, as my dad replied, ‘isn’t it obvious?’”

Heather’s mom had never spotted the signs, but her dad was quick to point out that their daughter was “a walking stereotype” who had posters of 90s icons like Courtney Love, Shirley Manson, and Skin from Skunk Anansie on her bedroom wall.

“I just thought she liked music,” said her mom, to which her dad laughed, “She likes Metallica, but there’s no posters of them in their undercrackers!”

Her parents were completely chilled and accepting. 22 years on, and they’re still just as close.

“I texted my mom that she had to come upstairs because I wanted to tell her something. As soon as she opened the door I was already tearing up due to the anxiety,” says Sxkura.

She explained how she didn’t feel comfortable in her own body. After which, her mom hugged her and they had a lengthy conversation about what that meant.

Her mom finally understand what Sxkura meant and felt relieved that she’d told her about it. She even asked about her name and immediately stopped using her dead name.

“She’s been a sweetheart ever since I came out to her.”