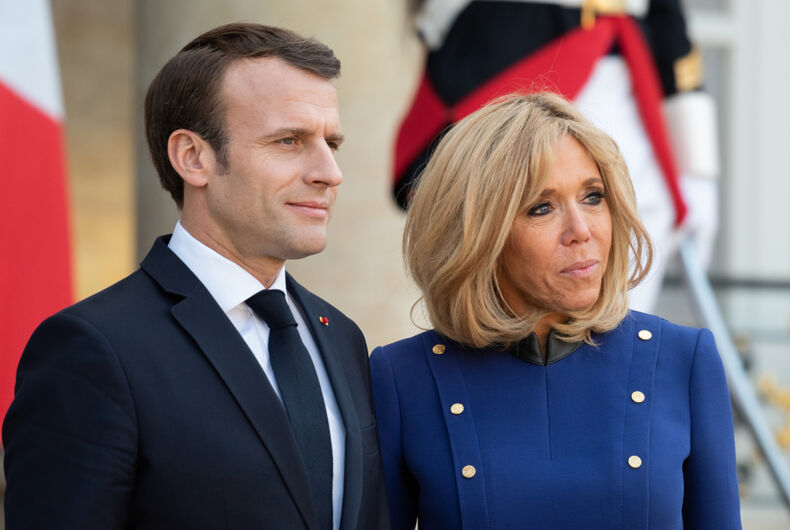 France’s first lady is planning to sue over a rightwing rumor that she is a transgender woman after over 34,000 tweets discussing her gender identity.

The staff of Brigitte Macron, the wife of French President Emmanuel Macron, confirmed to the Figaro that she is going to pursue legal action against the people who started the rumor that she’s trans and did not give birth to her children. Her supposed deadname, “Jean-Michel Trogneux,” was trending for several days this month on French Twitter.

The false statement was first made in the anti-Semitic newsletter Faits et Documents back in September, according to the more mainstream publication Numerama. “Independent journalist” Natacha Rey wrote a series of articles for the newsletter saying she had undertaken an “investigation” into the “mystery of Brigitte Macron” and talked to “numerous experts.”

Her “proof” was that Macron often covers her neck and that there aren’t many pictures online of Macron from when she was young, before social media and before she was famous.

For several months, the rumor mostly stayed in the far right, being shared on social media by accounts associated with anti-vaxxers and anti-Semites as well as French QAnon believers (although even the French QAnon group “les DéQodeurs” has refused to accept this rumor because it’s too absurd).

On Facebook, Rey said that Macron’s three children were carried by a cis woman Macron previously had a relationship with, according to PinkNews.

In November, Rey elevated the rumor during a four-hour YouTube interview with anti-vaccine psychic Amandine Roy. Rey said that she has been researching Macron for three years now and that she had solid proof that Macron is trans, stashed away “in a sealed envelope, which was deposited with a lawyer with a well-known name.”

That video got 460,000 views before being deleted by YouTube, and #JeanMichelTrogneux was trending multiple times on French Twitter this month as tens of thousands of tweets were sent with that hashtag. Even the Wikipedia page for “The Trogneux family” had to be put on semi-protected status because anonymous users kept on changing it.

Conspiracy theory expert Tristan Mendès-France told Marianne that the rumor started on the more radical parts of the internet before being accepted by “anti-Macron opportunists, ready to do anything to prove his corruption and attack the image of his wife.”

Mendès-France notes that the far-right has often used rumors that Emmanuel Macron is secretly gay to attack him and that accusing his wife of being trans, to them, dovetails with his supposed homosexuality.

“Radical far-right conspiracy theorists’ worldview, whether they’re American or French, always has a moral degeneracy among the elites, and therefore a sexual degeneracy. That’s the myth of ‘elite pedophile-Satanists’ with deviant practices,” he said, referring to QAnon.

Macron isn’t the first first lady to be the subject of this kind of fake news. In the U.S., rightwing conspiracy theorists have said that Michelle Obama is a transgender woman with the deadname “Michael Lavaughn Robinson.”