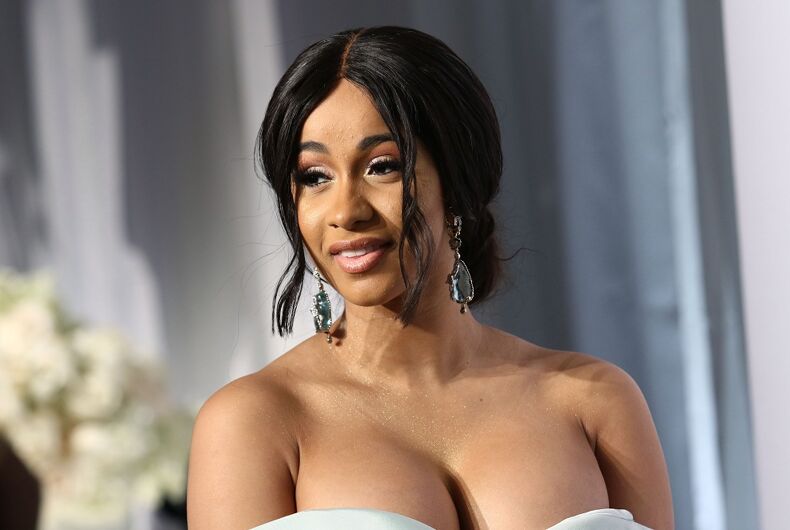 Cardi B called out people who were criticizing a little boy who played with a toy kitchen set, calling them “so close minded and dumb.”

Someone posted a picture of the tyke playing with a toy pot, writing that “People on Facebook are having a full blown gender war about this photo.”

Related: Watch these brides freak out as Raven-Symoné brings out Cardi B to officiate their wedding

The Grammy-winning hip hop artist decided to throw in her two cents, bringing up child YouTube star Ryan’s World. That is not the same child in the photo.

“The fact that Ryans world the little boy from YouTube make millions and he have a kitchen set like this and y’all worry about if this gay or not,” she wrote, using the facepalm emoji. “Stop being so close minded and dumb.”

The fact that Ryans world the little boy from YOuTube make millions and he have a kitchen set like this and y’all worry about if this gay or not 🤦🏽‍♀️🤦🏽‍♀️🤦🏽‍♀️Stop being so close minded and dumb https://t.co/SlhfsJx95w

“Mama, how do I make eggs! I don’t wanna burn them.”Thinking , damnit I should’ve learned how to cook for myself when I was younger. 🤷🏾‍♀️🤷🏾‍♀️🤷🏾‍♀️

I bought my son a kitchen set when he turned 3. We basically played with it for over a year. He liked cooking me food and he laughed when I acted like it was bad 🤣 Its about memories and fun.

Meanwhile my son is in culinary getting his career goal on pic.twitter.com/eucI75MMov

When they see they son in the kitchen reaching for the spices pic.twitter.com/8vsdQmc9ET

My son has dolls, monster trucks, a toy kitchen, superheroes etc. he plays with everything. He asks for his nails painted pink like mama and then runs around in the mud with the dog catching bugs. People need to let kids be kids and stop pushing their insecurities and bs on them

Men can cook too… unless y’all just want to be house wives that do everything pic.twitter.com/l6X6vKK96B

She was the school principal for 16 years. Until she hung up a rainbow flag.

HIV rates dropped significantly in 2020. Was it because of COVID-19?