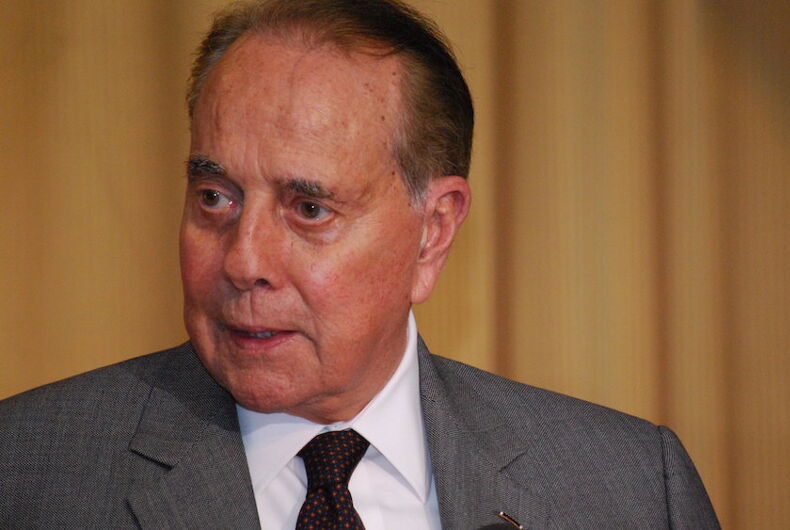 Former Sen. Bob Dole died today at the age of 98. His death is an excuse for the media to reminisce about what the Republican Party ‘used to be.’ As the party’s nominee for president in 1996 and as a Senator from Kansas for a quarter of a century, Dole earned a reputation for compromise with Democrats that led to the creation of the American with Disabilities Act (ADA), a major legislative milestone that would be unthinkable in today’s GOP.

Dole was also the last GOP presidential nominee who didn’t make the religious right the core of his base, at a time when that group was exerted increased control over the party. That resulted in one of the strangest episodes in Dole’s presidential campaign.

Related: Dr. Oz is running for Senate as a Pennsylvania Republican. He lives in New Jersey.

In 1995, the Log Cabin Republicans sent Dole’s campaign a check for $1,000. In a move widely interpreted as an effort to shore up his credibility with the right wing, Dole returned the check.

“I don’t agree with their agenda — I assume that’s why it was returned,” Dole said at the time.

Then, after two months of defending the decision, Dole abruptly shifted course, blaming the check’s return on his staff.

“I think if they had consulted me, they wouldn’t have done that,” Dole said then. “I just didn’t agree with what happened.”

Predictably, no one was happy with the flip flop. The religious right was particularly incensed. “Dole still doesn’t seem to understand that accepting money from a radical homosexual activist group is not in keeping with some of his family value themes,” Robert H. Knight, director of the Family Research Council at the time, complained.

It’s not as if Dole was secretly friendly to LGBTQ causes. Dole reportedly stopped attending his usual church in D.C. when the minister embraced LGBTQ rights. When Hawaii seemed on the verge of legalizing marriage equality in 1996, he proposed legislation that would allow other states to refuse to recognize the unions.

He also ripped Bill Clinton when he tried to end the ban on gays in the military, relying on an old trope between troops in close quarters.

“Serving is not a right,” Dole said. “It is a privilege in the United States. And there are certain restrictions.”

As late as 2014, Dole was still on the attack against LGBTQ rights, complaining that Sen. Rob Portman (R-OH) wouldn’t approve a treaty on disability rights because he had “already voted for same-sex marriage.” In fact, that had nothing to do with the treaty or Portman’s lack of support for it. If anything, the religious right was driving opposition because they thought it would weaken support for home schooling.

While he wasn’t squarely in the religious right’s corner, he did carry some of the other noxious seeds that have also taken root in the GOP. First and foremost, he was mean.

While obituaries like to cast this as incisive or acerbic — and Dole did have a sharp wit — he was willing to engage in the kind of scorched-earth politics and personal attacks that now characterize the GOP.

Perhaps the most famous example was when Dole was running as Gerald Ford’s running mate in 1976. In a vice presidential debate against Walter Mondale, Dole explicitly blamed the wars of the 20th century on Democrats.

“I figured up the other day, if we added up the killed and wounded in Democrat wars in this century, it would be about 1.6 million Americans, enough to fill the city of Detroit,” Dole declared, in a particularly low blow.

Almost 30 years later, Dole was among those who questioned whether John Kerry deserved his wartime decorations. “Three Purple Hearts,” Mr. Dole said of him. “and never bled that I know of.”

That’s a remarkable — and reprehensible — statement for a wounded veteran to make about another veteran, especially. As a soldier in World War II, Dole was grievously injured and endured multiple operations that left him without the use of his right hand.

Perhaps none of this is surprising for a man who considered Richard Nixon to be his idol. The resentment at elites and general bitterness about life faded from the public, just as Dole did as well.

His self-deprecating sense of humor helped. (Can you picture Donald Trump doing an ad for Viagra, as Dole did?)

But Dole’s death is a reminder that any belief that Donald Trump was a fluke within the Republican Party is simply untrue. The anger and resentment we see in today’s GOP was also there in 1996, and long before that.

Dole’s disastrous presidential campaign was every bit as policy-free as Trump’s. What did change was the voting public’s appetite for rage.

Dole may just have been a man before his time.