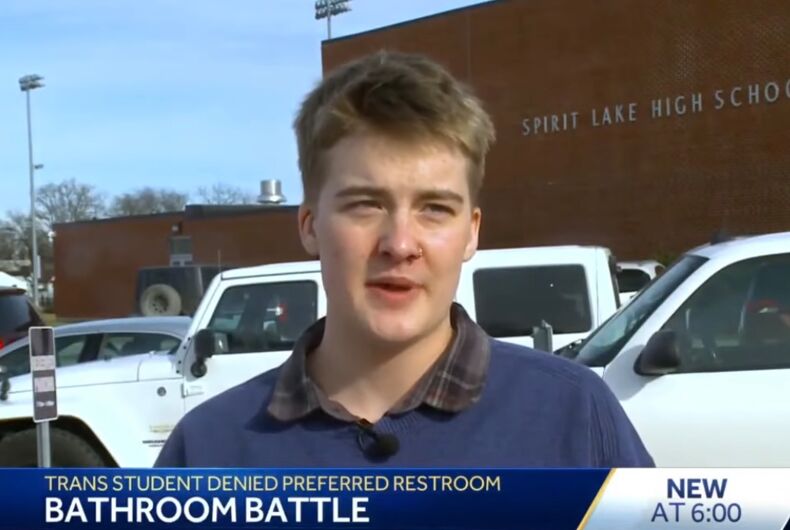 A 16 year-old student at a high school in Iowa is being banned from using the restrooms that other male students use, and despite well-publicized rulings against rules like this in the past against other schools, they are threatening him with disciplinary action if he tries to use the facilities again. The school’s principal claims it’s okay because they are “sensitive” to “transgender issues.”

Ethan Stucker is set to graduate in May, and says he has used male restrooms for nearly two school years at Spirit Lake High School with no issue, until he was summoned to the guidance counselors’ office this week.

Related: GOP candidate wants libraries to out kids who check out LGBTQ books

Stucker was told that he could no longer use the designated restrooms that align with his gender identity, and that if he attempted to, he would be sent to the principal’s office. They “assigned” him to the all-gender restroom only accessible in the school’s teacher’s lounge.

Jennifer Larson, Stucker’s mom, claims she was not notified about the sudden policy, and when she reached out to the school, she was not given much of an explanation other than “There was no concern on safety, but it was rather a student’s feelings of maybe being uncomfortable in the bathroom with transgender students,” Larson said.

Rather than using the student’s alleged concerns as a teaching moment about inclusion and diversity, they instead decided to restrict Stucker’s access to the bathroom.

Larson condemns the decision, saying, “It’s ostracizing those students and making them feel separate from everyone else and I don’t get how, the school is all about bringing us together and being one with the community and a one school equality thing and this does not fall in line with what they claim they want to do.”

Casey O’Rourke, the principal at Spirit Lake, said in a statement to local ABC affiliate KCAU, “We are aware of the request and are meeting to accommodate the matter. We do not see this as an issue as we are very sensitive to transgender issues.”

Similarly, Spirit Lake Community School District superintendent David Smith stated that “we are investigating the current regulations,” but made a point to added that the district is “sensitive to both sides of the issue” of people being banned from restrooms based on their identity.

Several students in recent years that have been targeted by exclusionary or restrictive restroom policies have taken the schools and administrators — and won. Gavin Grimm won his years-long legal battle against the Gloucester County School Board in Virginia which held a meeting to create a policy to block him from using the boys restroom in 2014. The district settled this year in an agreement that will cost them $1.3 million dollars.

Matt Woods of Minnesota had to sue the Buffalo-Hanover-Montrose School District because they forced him to use a single-stall bathroom, which no other student had to use, starting in sixth grade. They settled without admitting wrongdoing, but not only will they have to pay $218,500, but they’ll also have to allow transgender students to use the correct bathroom and play sports on the team that aligns with their gender.

The U.S. Court of Appeals for the Fourth Circuit ruled in August 2020 that Drew Adams of Florida had to be allowed to use boys’ restrooms after his school tried to make him use a single-person bathroom or the girls’ restroom. The Court relied on the 2020 decision Bostock v. Clayton Co. as guiding precedence to “conclude that Title IX, like Title VII, prohibits discrimination against a person because he is transgender, because this constitutes discrimination based on sex.”

Stucker, meanwhile, has decided that he won’t comply with the policy in the meantime. “I don’t plan to, because I have every right to be treated the same as every other male student in there,” he told CBS affiliate KCCI.

He’s already on track to graduate this spring, a school year early, and says that he didn’t have any disciplinary issues or complaints on his record.

He said the situation “really upsets me, and I had no idea that that was coming, so it really caught me off guard.”

He also decided to start a petition on Change.org. It has more than 1,100 e-signatures as of this writing.

The 16 year-old bravely states, in the third person, that “he was not allowed to use the public school restrooms due to his gender identity… School officials have admitted that they have no reasonable cause to believe that this student would cause harm to others in the bathroom.

“Furthermore, the decision made by Spirit Lake High School is in violation of Title IX, the 2007 Iowa Civil Rights Act, and the Iowa Department of Education’s guidelines,” the petition reads.

“It really is important because there’s a lot of especially younger trans kids in the school who really need a safe place to grow up and the school isn’t providing that right now,” Stucker told KCAU.