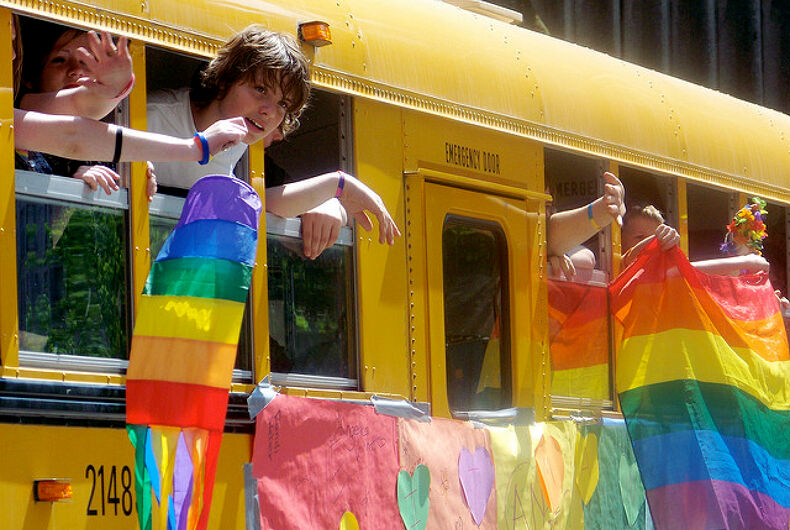 Abigail Shrier, author of Irreversible Damage: The Transgender Craze Seducing Our Daughters, is fighting to have two California teachers fired for “recruiting” students into the school’s gay-straight alliance (GSA) club.

After obtaining secret audio from a talk about GSAs given by the teachers, Shrier — whose aforementioned book has been removed by the American Booksellers Association as inflammatory pseudoscience — wrote an article on her Substack newsletter titled How Activist Teachers Recruit Kids.

The article named two California teachers, Loria Caldera and Kelly Baraki, and alleged that they spied on students to recruit them for the GSA at Buena Vista Middle School in the Spreckels Union School District (SUSD).

Shrier’s post drew the attention of conservative outlets as well as parents inside and outside the community inundating the school district with complaints, according to The San Francisco Chronicle.

Shrier honed on a comment by Baraki about observing students through the use of GoGuardian, a program that allows educators to view the web activity of students while they’re virtually learning.

In her comment, Baraki said, “When we were doing our virtual learning — we totally stalked what they were doing on Google, when they weren’t doing schoolwork. One of them was Googling ‘Trans Day of Visibility.’ And we’re like, ‘Check. We’re going to invite that kid when we get back on campus.’”

Shrier wrote in her Substack post, “For those paying attention, the educators who guide California teachers in the creation of middle school LGBTQ clubs asserted the following: They struggle to maintain student participation in the clubs; many parents oppose the clubs; teachers surveil students electronically to ferret out students who might be interested, after which the identified student is recruited to the club via a personal invitation.”

Caldeira said she did not monitor student activities on her own initiative. With the onset of virtual learning, Buena Vista Middle School began using GoGuardian, a software that is usually installed on school-provided devices and allows teachers to see what students are doing on their computers while they are in class. The software is designed to flag words or behaviors identifying children at risk of harming themselves or others.

According to its website, GoGuardian is used in 30,000 schools with over 22 million K-12 students, helping teachers communicate with students and keep them on task. Caldeira said her school uses the software for suicide and violence prevention as well, but individual teachers do not have access to student information on those topics.

Amelia Vance, vice president of youth and education at the Future of Privacy Forum, explained that, legally speaking, an educator seeing something a student is doing through GoGuardian is not any different than a teacher walking around a classroom and noticing students’ behavior or what they had visible on their screens.

Privacy experts agree that there is no law preventing teachers from monitoring students with a program like GoGuardian.

As for the “we totally stalked what they were doing on Google” comment, Caldeira said, “It was tongue-in-cheek.” She also said teachers do not have access to students’ private social posts, messages and emails.

Caldeira said she didn’t intend to track her students’ activities online. “My theory is: If you were off task, the consequence is a poor grade,” she said. However, one day, while using the software to chat with students, she noticed one student on a website about Transgender Day of Visibility.

“I see a site that’s emblazoned with rainbows,” she explained. “How am I not going to notice that?”

After class, she said, she made a mental note to invite the student to the GSA, known at her school as the UBU (You Be You) club.

Shrier decried the fact that Buena Vista’s UBU GSA does not inform parents if a student attended the GSA. California law protects students’ right to privacy in gender identity and any activities they participate in based on that. Under California law, teachers cannot tell parents anything about their child’s sexual orientation or gender identity without the child’s permission, “with rare exceptions,” according to the American Civil Liberties Union.

Caldeira said the club had existed for more than six years. The club also allowed students to ask questions they might not be ready to bring up with their families.

“Our superintendent has attended our meetings. He’s attended our events,” she said. “Our club has been used as part of our suicide-prevention plan, saying that we have these spaces available for students in crisis.”

Vance said there are no laws barring teachers from approaching students about a GSA or any other club.

Jacob Agamao, LGBTQ+ services coordinator for The Epicenter in Salinas, pointed out there is good reason to offer confidentiality – precisely because of this type of backlash. Attending an LGBTQ+ club might jeopardize a child’s safety.

“There are so many situations we find ourselves in as queer people where we feel unsafe,” Agamao told the Chronicle. “We already feel that we don’t belong. But gay people exist everywhere – in church, at your workplace, within the conservative media. We are everywhere.”

“I think our students have a right to certain privacies simply out of self-preservation,” he said. “If your child feels loved and accepted in their home, they’ll have no problem telling you these things.”

On November 19, SUSD Superintendent Eric Tarallo, school board President Steve McDougall and Buena Vista Middle School Principal Kate Pagaran posted a letter saying they had suspended UBU and were implementing new communication guidelines for clubs and announcements based on Shrier’s reporting. They also said that teachers will be prohibited from monitoring student web activity for non-academic reasons.

Four days later, the district opened an investigation and placed the teachers on administrative leave.

Advocates for LGBTQ youth in the town of Buena Vista are alarmed at what appears to be another example in which influential conservative voices have forced the hands of local officials.

Caldeira, a 2017 STAR award recipient for her work with special-needs students, is raising her voice in concern for her students.

“Can you imagine? Seriously, we have kids in our club right now who are out at school, (but) they’re not out at home. The only two teachers that they have ever spoken to have been taken away,” said Caldeira, her voice and hands shaking as she spoke at a Monterey coffee shop in her first interview since the district suspended the GSA.

Recently, 38 local elected and community members wrote an open letter to Spreckels Union School District espousing consternation at the GSA being shut down by the school potentially leading to great harm for LGBTQ+ students in Buena Vista.

“I know the value and the importance of these clubs to students who really have nowhere else to go as far as acceptance of who they are, or maybe they’re afraid,” he said. “It’s sort of painful to see people speaking as though they’re speaking in defense of children when really they’re speaking in defense of their personal ethics, their religious beliefs — things that have nothing to do with the safety of the child themselves.”

Proposals, hugs and mittens: 9 of this year’s most feel good stories will make you smile

Trans icon Gavin Grimm is at risk of homelessness. His community is rallying to help.