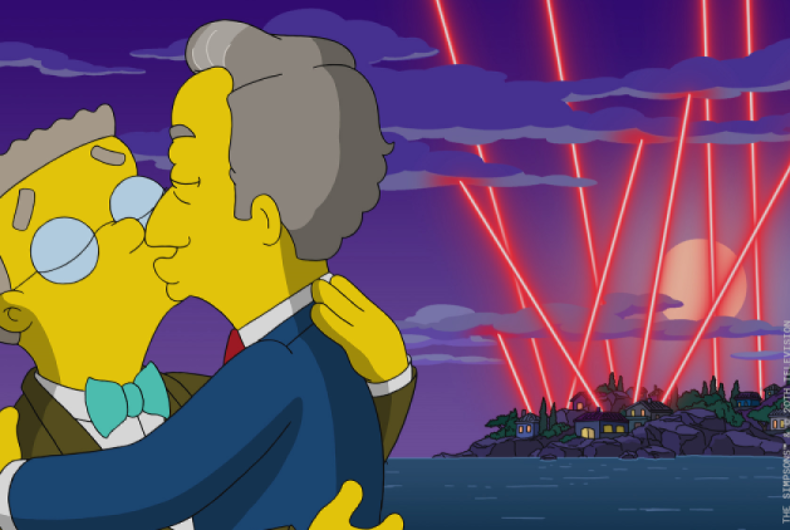 Smithers and Michael De Graaf share a kiss on The SimpsonsPhoto: Fox

Waylon Smithers is finally finding love in an episode of The Simpsons that will air shortly before Thanksgiving.

When Smithers meets “famous fashion designer” Michael De Graaf, voiced by out actor Victor Garber, it’s a whirlwind of romance as the two trot the globe together.

“To be able to work with Johnny on this was, like, such a dream and to be able to see how truly funny and talented he is was just, you know, super fun and rewarding,” longtime series writer Rob LaZebnik said. Johnny was the inspiration for the coming out episode, he said.

“I know my dad is a comedy writer. I grew up with him — obviously, I know he’s a funny guy,” Johnny added. “But actually getting to sit down and write jokes with him was so much fun. And there were some moments where I was like, ‘Dad, that’s disgusting — we can’t put that on television,’ which I didn’t expect to be saying because I’m usually the disgusting one.”

“We now have this piece of content that we put into the world together that is a combined brainpower of the two of us.”

But Smithers’ coming out at a gay mixer hosted by Marge Simpson was met with critical reviews by the LGBTQ community who thought it perpetuated some stereotypes when Mr. Burns’ faithful assistant

“The episode’s fundamental lack of imagination about ways to portray gay life onscreen can be summed up with one detail: The guy Smithers ends up with is a fiery, lispy Latin bartender cut from the same cloth as Simpsons star Hank Azaria’s character in the 1996 movie The Birdcage, TIME Magazine sniffed. “If you’re in need of a second, George Takei was a guest star, playing himself.”

“So often, gay romances are a subplot or alluded to or shown in some kind of montage or as a punchline,” Johnny assured. “And what I think I was really excited about, with this episode, we get to see — without spoiling too much — the beginning, middle and who knows how it ends of a gay relationship, of really getting into the nitty-gritty of how gay people date, how they meet, what it’s like.”

“That was really special to me to get to highlight characters who are not punchlines, who are fully formed.”

The episode airs on November 21 on Fox.

i can finally come out of the closet as a d’ohmosexual. watch a very gay episode of @TheSimpsons on november 21, written by me and my dad 😭😭😭 pic.twitter.com/RqlMcetIUv