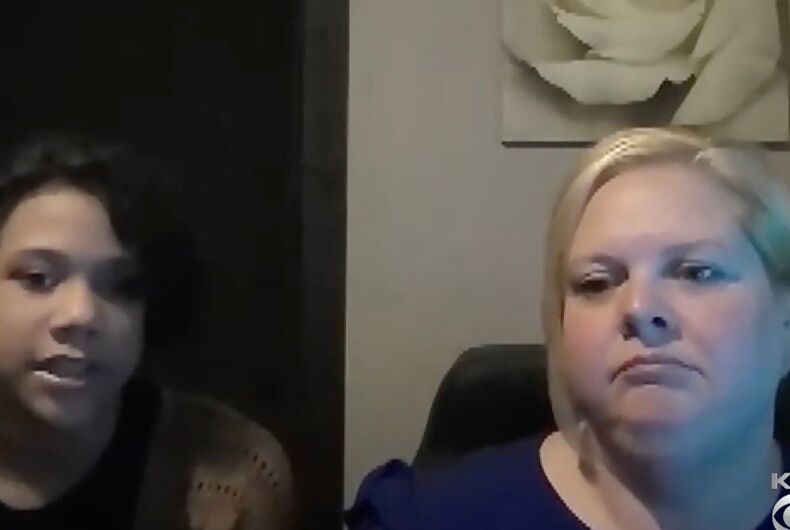 A transgender student at Pittsburgh’s Armstrong High School was physically assaulted by a peer last month, leaving them with a concussion.

14-year-old Willow Andring told CBS Pittsburgh that the male student who dragged them to the ground and beat them had been verbally assaulting them, before the insults escalated to violence. The entire assault was caught on video.

Related: 3 arrests made after trans woman is senselessly beaten while working at 7-Eleven

“He pulled me from behind and started beating me up,” Andring said, “and before that he had been calling me names, saying, ‘It’s not a she, it’s not a he, it’s a it.'”

Andring’s mother, Heather, is now calling for change at the school.

“This impacted the whole community at Armstrong and you just can’t help but think about the other kids who were there, the ways that they’re treating one another and just kind of thinking about how do we move ahead and positively impact, not just my kid, but all the kids,” Heather told WTAE Pittsburgh.

This isn’t the only issue the school has experienced as of late. Another recent incident led to Armstrong students being banned from hockey games after they chanted insulting remarks at a competitor’s woman goalie.

The community, Heather said, needs “to take ownership of this. We have a great community and a great school here, but you can’t have all of this happen and not step back and pause and say that we don’t have issues that we need to work on.”

Heather spoke about the need for a change in school culture at last night’s school board meeting.

“Appreciate all of your comments on behalf of the board,” a school board member said in a clip from the meeting shared by CBS Pittsburgh. “We are listening and we are certainly willing to work with the community and the administration to do whatever it takes to be proactive and not reactive to this problem and promote change.”

Franklin Graham has critical surgery to fix a hardened heart