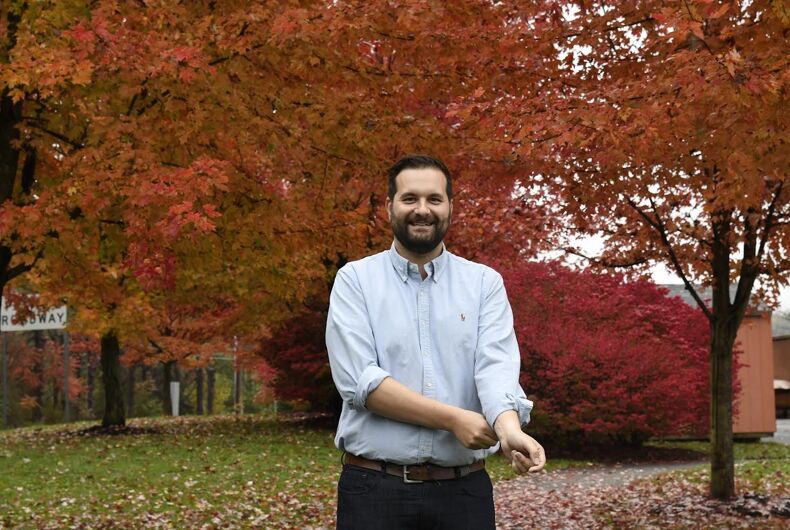 Democrat Sean Meloy is an expert at helping LGBTQ political candidates win races. As the Vice President of Political Programs for the LGBTQ Victory Fund, he has guided candidate after candidate as they have smashed through rainbow ceilings and made history to represent their towns, cities, and states.

Now, after years as an organizer, Meloy has decided to step into the candidate role, himself. On Monday, he announced his campaign for Congress to represent Pennsylvania’s 17th district—a key swing district for the state.

Related: There are only 5 Black trans elected officials across the entire United States

Today, I launch my campaign for Congress in #PA17.

I was born and raised in Allegheny County. I’m a public school kid, a lifelong organizer and the product of a middle class upbringing that is no longer available for so many families. I’m running to fix that.

“Anyone who is looking and living in reality understands that our system is just broken,” Meloy told LGBTQ Nation. “I’ve seen that firsthand. I think good people getting into office—certainly people who have been traditionally underrepresented—is working to help fix that system.”

Representing the interests of District 17 will always be his priority, Meloy said. He is driven by many issues, including protecting civil and voting rights, ensuring everyone can earn a living wage, and mitigating the type of extremism that led to the Capitol insurrection.

“People are so polarized that they feel the only way they can win is not accept the results and then also keep other people from actually being their full selves with equal rights under the law,” he said.

“The pandemic should have brought us together more as a community to look out for each other, and sadly because of disinformation and this embrace of extremism, it turned into a political war, and that’s just mystifying to me.”

If someone had told this not-yet-out gay kid that one day, he’d launch his campaign for a swing congressional seat right outside his 3rd grade classroom, I know he wouldn’t believe you. pic.twitter.com/nfOvUDsPcX

Meloy grew up in District 17 and has been involved in political organizing since he was a student at Hampton High School, where he started the Young Democrats club. He was first inspired to work for change as a young Boy Scout.

“That level of civic engagement and caring about your community was inherent in that. I knew I wanted to have an impact on the world.”

Since then, Meloy has worked for Pennsylvania Congressman Mike Doyle and served on the Pennsylvania Commission on LGBTQ Affairs, to which he was appointed by Gov. Tom Wolf (D). He was also the Director of LGBTQ Engagement for the Democratic National Committee.

According to his website, the number of elected LGBTQ officials in the country has doubled during his time at Victory Fund.

Rolling up their sleeves and getting the job done is what our brothers and sisters in labor do – whether it is in elections, on the job, or in our communities.

Was proud to join them this morning to kick off the @RichardTrumka week of community service. https://t.co/fRcGlOBT7V

He also doesn’t think voters are as focused on his identity as they may have been in the past.

“I think they want people who really do understand the district, who are going to go in and understand the problems not just in the short term but also in the long term and will really work to help advocate and make progress. That’s what I’ve been doing. That’s what I want to do.”

Meloy emphasized he is running not to make history, but rather to be a voice for his constituents. That being said, he also understands the dire need for more LGBTQ voices in government.

“Our voices at the table are going to help move the ball down the field while we advocate for our communities in an exemplary way.”