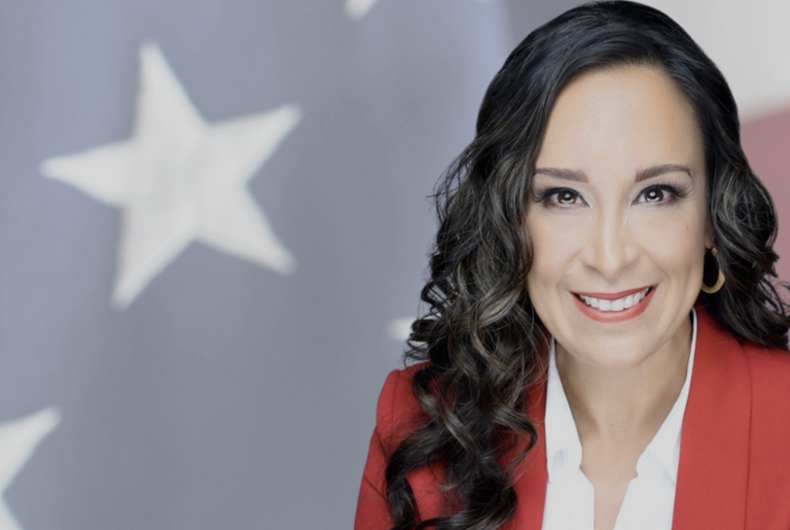 A Republican Congressional candidate who has been called a “rising star” by GOP leadership is now being accused of abusing a 14-year-old girl.

Monica De La Cruz is running for Congress in Texas’s 15th District, and she has been a vocal opponent of LGBTQ rights. Just this week, House Republican Leader Kevin McCarthy included her on his list of “young guns” to support in the party.

But now her estranged husband Johnny Hernandez, who she married in 2015, is accusing her of abusing his 14-year-old daughter in his petition for divorce.

In one incident described in court documents obtained by the Washington Post, he said that his daughter was crying in church on Sunday because of spilled coffee. He said that De La Cruz pulled the girl into the bathroom and pinched her until she stopped crying.

Hernandez said that De La Cruz threatened to divorce him if he brought his daughter to live with them.

The daughter, according to court records, needed to be hospitalized at times due to mental health issues, and Hernandez is accusing De La Cruz of using that for sympathy as a part of her Congressional campaign.

He said that a tweet she sent last week from her campaign account announcing the divorce to her supporters mentioned the girl when De La Cruz wrote, “We are dealing with some mental health issues in our family & would appreciate your prayers.”

“I believe she is putting her campaign in front of our family,” he said. “She is using my daughter for sympathy votes. My daughter is going through mental health issues, and she should not be using that on her campaign page.”

He said that De La Cruz’s antipathy to his daughter got to the “point where I had to make a decision for the best sake of my daughter,” adding that De La Cruz “didn’t want to go to parenting classes” or “make things better for my daughter.”

De La Cruz ran for Congress in 2020 and lost to Rep. Vicente Gonzalez Jr. (D-TX), but he’s going to run in a different district in 2022 so she has mounted her campaign again.

She is running on a campaign opposed to LGBTQ equality. In a post on Facebook, she shared a headline about the Texas state legislature’s attempts to ban transgender girls from participating in school sports.

On her campaign website, De La Cruz excoriated Gonzalez for voting for the Equality Act, which would add sexual orientation and gender identity to federal civil rights legislation.

She said that the Equality Act “discriminates against people of faith and violates religious freedom,” probably referring to how the Equality Act applies to all people, including Christians who dislike LGBTQ people.

She also said that the bill “promotes biological males sharing private spaces like locker rooms with girls and women,” using derogatory language to refer to transgender girls and women.

De La Cruz said that the accusations of child abuse are “false.”

“I’m heartbroken that as we work through some mental health issues that involve a minor this deeply personal matter is now being exposed in the national press,” she said.

McCarthy has not commented on the allegations.

Queer adults at much higher risk of suicide